We asked our singers to share their favourite Tenebrae recording and one other tune that’s helping them to survive the lock-down. Have a listen to the Spotify playlist, and see the previous blog post here.

Two tracks I’ve always loved from Tenebrae are the Shakespeare Songs by Herbert Murrill (Music of the Spheres). I’m from a church music background and always knew Murrill as the composer of Murrill in E, so I was blown away by the harmonies in Come Away Death. O Mistress Mine is also very pretty, and it always brings a smile to my face to see these songs down on a programme.

A song I’ve listened to a lot recently has been The Living Daylights by A-ha. It’s been a great song to run to, and I discovered it as my brother and I have watched a lot of James Bond. It’s probably the most musical Bond film – Kara Milovy is an elite cellist and at one point she and James ride down a snowy hill on her cello case whilst he holds up the Stradivarius to shield them from machine-gun fire. Perhaps a metaphor for a Tenebrae rehearsal.*

Below is a picture of my brother and I enjoying this slight release of lock-down to play some golf. I’d like it noted that I won the match, and actually made one birdie. But I did also misjudge a practice swing on the 7th and accidentally connect with the ball, sending it flying sideways into trees. So all in all it was a mixed bag. 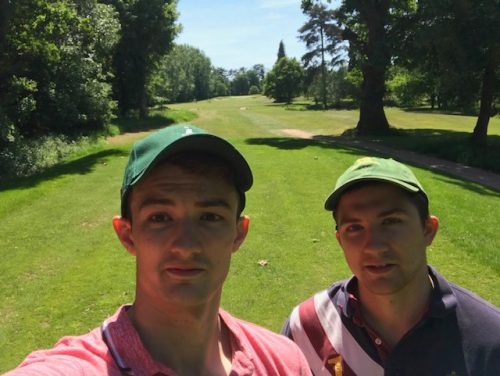 * Tom has assured us that this is hyperbole!

My favourite Tenebrae track is Arnold Schoenberg’s Friede auf Erden from the Symphonic Psalms and Prayers disc. It’s one of the first pieces I sang with the group and I can remember registering in the first rehearsal a sense of wondrous fear I had never experienced before. I tap into this emotion every time I sing with Tenebrae. I hope it’s a sustainable performance method.

Besides the other excellent tracks on the ‘Symphonic Psalms and Prayers’ disc, I am currently listening to Maurice Ravel’s Ma mère l’Oye performed by the New York Philharmonic, conducted by Pierre Boulez. My flatmate Jack and I are learning to play it in its original form – a piano duet. Ravel wrote it for Mimi and Jean Godebski, aged six and seven. Knowledge of this haunts us throughout our thrice-daily rehearsals. 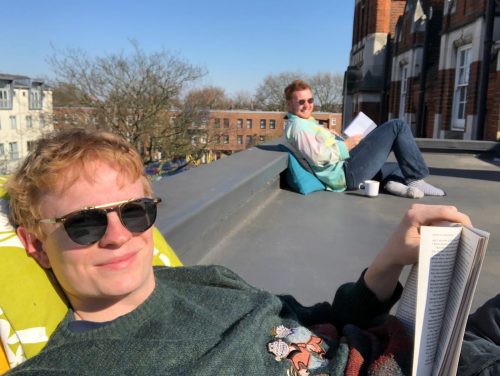 Almost 7 weeks in, plenty of us are struggling with lock-down life. Soprano Ellie has been isolating with her toddler, and has shared her top tips for surviving quarantine – although we have to disagree with her about the Easter eggs! 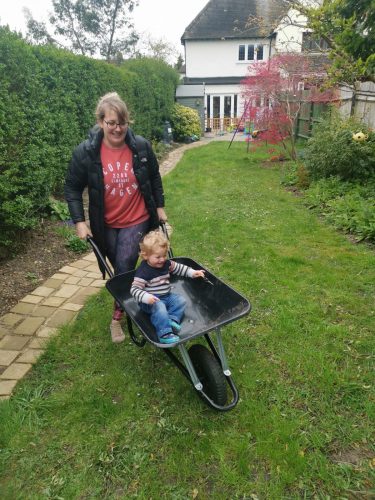 This week I bid farewell to Tenebrae for the foreseeable future as I’m off into the strange new world of furlough. My Tenebrae track for the playlist is the final movement of Joby Talbot’s Path of Miracles: ‘Santiago’. It’s my all-time favourite piece performed by Tenebrae and seeing it live really brings it to life – the storytelling and our signature movement around the venue is so integral it really is the only way to see it. The choir’s performance in Santiago de Compostela last September was truly one of the most emotionally charged concerts I’ve ever had the privilege to be part of – the ‘Herr, Santiago’ at about 10 minutes in brings tears to my eyes every time.

Whilst in lock-down I’m determined to get back into playing the piano and although I’m a million miles away from being capable of this, Chopin’s Ballade No 1 in G minor certainly gives me something to aim for. I’ll otherwise be filling my time with copious amounts of tea, finally reading all those books on the shelf and tending to my ever-growing succulent army. Au revoir for now! 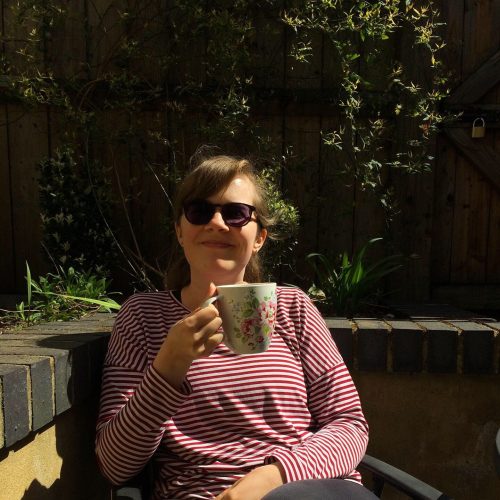 It’s hard to pick a favourite but Nikolay Golovanov’s Our Father from the Russian Treasures is a true gem for me. The Russian Treasures programme was the first concert I sang with Tenebrae and it was an exciting journey discovering lots of music I’d never heard before. It’s intense and beautiful and reaches an amazing climax towards the end which is just so thrilling to sing!

When I’m not self indulging in amazing Russian music I’m listening to anything on my London Marathon running playlist and a current favourite is Petals by TOPS. Despite the race being postponed until the autumn I’m enjoying some early morning running and have managed to escape London and soak up the quiet countryside in Suffolk.

Amy is fundraising for the re-scheduled race in October and you can support her here: www.justgiving.com/Amy-Blythe4 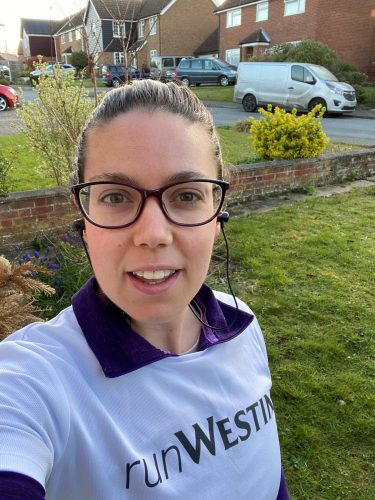 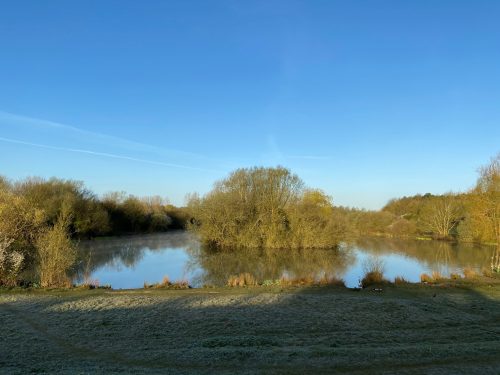 My chosen Tenebrae track is the motet Versa est in Luctum by Alonso Lobo. The text is pretty miserable so we won’t dwell on that for now, but this choice is more for what the piece represents in the context of my relationship with Tenebrae.

We open our ‘Spanish Glories’ concert programme with it and we perform it as far away from the audience as is practical, often starting with no introduction and emerging from the ambient sounds of the building. I think for everyone it’s a great way to collect ourselves, put the day behind us, whether it’s been a long car journey or an early morning flight, and set our intention for the concert, just us, before we share it with the audience. Personally, as I’ve taken time off from performing over the last few years to look after two small children, I’ve found the first few precious moments of this programme with my friends in the group and this piece bring things back into focus for me.

It’s a far cry from social-distancing at home with the family! We’ve introduced quite a bit of early evening crazy dancing to burn those last drops of energy and what could be a better than a spot of Count Basie. I’ve picked Flight of the Foo Birds for some pure silliness! Like all parents right now I’m sure, we are grasping for stuff to fill the days, managing to get out in the fresh air – helped enormously by the weather, and enjoying a congratulatory stiff drink at the end of it. 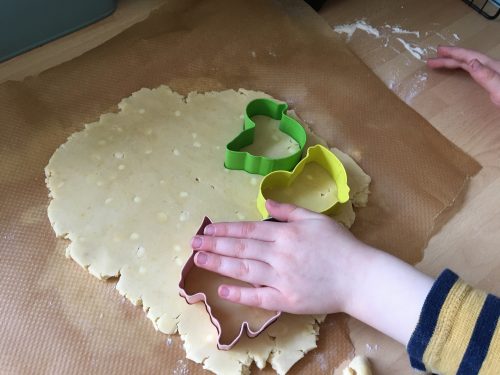 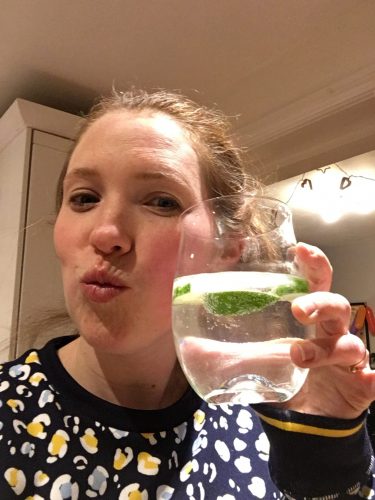 Due to the ongoing movement restrictions in the UK due to the spread of COVID-19, physical CD orders may take longer than normal to arrive.

You can still purchase tracks and albums for download for much of our back catalogue on our website.

Thanks for your understanding at this difficult time and please do get in touch with info@tenebrae-choir.com if you have any queries.