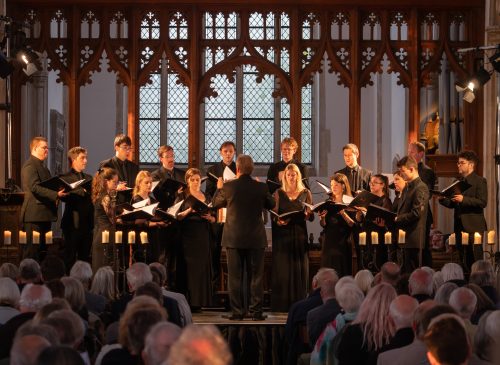 We are thrilled to return to the awe-inspiring Ely Cathedral for an exploration of Catholic splendour and Russian Orthodox fervour, centred on the music and influences of John Tavener.

In his early career Tavener was fascinated by the ornate rituals of Catholicism, as exemplified by Tallis’s spectacular 40-part motet Spem in alium – preceded here by the UK premiere of Unsuk Chin’s specially-composed prelude – but in 1977 he joined the Russian Orthodox Church.

The works which followed his conversion, music of radiant beauty and transcendental simplicity, were inspired by the distinctive sound of Russian Orthodox choral music – warm, tender and, with its remarkable ‘oktavist’ sub-bass voice, as awesome as the setting.

Due to the ongoing movement restrictions in the UK due to the spread of COVID-19, we are unable to fulfil physical CD orders until further notice.

You can still purchase tracks and albums for download for much of our back catalogue on our website, or Amazon are able to deliver physical CDs whilst stocks last.

Thanks for your understanding at this difficult time and please do get in touch with info@tenebrae-choir.com if you have any queries.19 t