Still reeling from Jenga-related highs, coaches were boarded for Dallas early on Saturday morning with the hope of arriving just in time for the consumption of an offensive amount of BBQ. Dallas did not disappoint. After what can only be described as an unholy feast for the senses, we began preparations for concert number 5 in Dallas’ (vast) Park Cities Presbyterian Church. Reportedly, Jamie could hear the beef in our sound…

The unexpected star of the day was Doodle, a game keenly evangelised by the lovely Hannah King, providing so much entertainment and laughter that there was barely enough time to squeeze in the ladies’ dressing room Lizzo Party and S-Club sing-along before the concert. 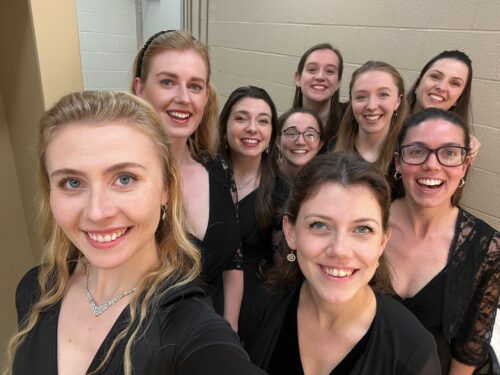 Our reception in Dallas was amazing and the cavernous church was a delight to sing in. We were even treated to a cookie reception afterwards and a chance to mingle with the welcoming Texan audience. The less sleep-deprived members of the choir were hosted by the church at a drinks reception in a neighbouring hotel, with panoramic views of the city – a real highlight of the trip so far!

The first half of our last day was spent en route to Houston, with a notable stop at  Buc-ee’s. For those who haven’t experienced this fine establishment, picture the chaos at the Lidl checkouts, but filling a massive, brightly-coloured supermarket with an entire wall of beef jerky and beaver(-or-was-it-otter-)related items – nuggets, t-shirts, you name it – and fill it with the population of a medium-sized town. I for one was not prepared.

Upon arriving in Houston, our first concern was of course where to eat, and Simon Grant, resident connoisseur, led a group of us to a local food-hall which hosted everything from pizza to gumbo, tandoori carrots to barbeque tofu. Happily full, we made our way to the Cullen Theatre for our final rehearsal, reunited with the lovely Gabriel Crouch.

It was thrilling to sing to such an enthusiastic audience, and to reprise the Rheinberger Mass (by now a tour favourite) with the Sanctus as our encore and concert tear-jerker. It was an electric final concert, and such a musical high to go out on. Needless to say, the concert was followed by a number of emotional group selfies in the dressing room, and a trip to our hotel’s rooftop bar to celebrate. The front row even managed to earn free beers by singing Holst’s Ave Maria to the (quite surprised) bar staff! 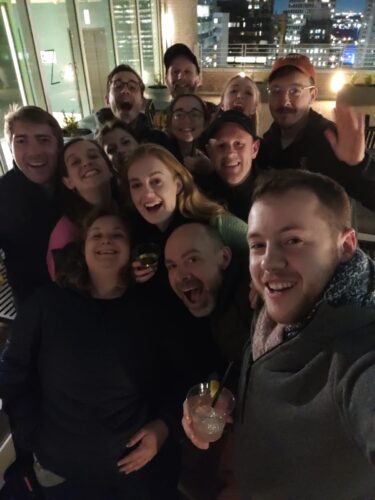 Back on UK soil, wrapped up at home trying desperately to fight the temptation to go to bed at 5.30pm, it’s lovely to reflect on what has been a wonderful whirlwind of a tour. It was a privilege to sing in some amazing venues for appreciative and welcoming audiences. Enormous thanks goes to Lizzy and Christie for keeping us all in check and making everything run so smoothly, and to Gabs and Jamie for such inspirational music-making!