Since I last wrote the autumn has set in and the leaves are falling. The transition from summer has gone by in something of a blur as Tenebrae enjoyed its busiest September since we began performing nearly 20 years ago. In August we had tremendous fun performing at the BBC Proms, making our debut at the Royal Albert Hall alongside Soumik Datta, pianist Martin James Bartlett and the sensational string group 12ensemble. The BBC had chosen for us a programme designed to calm the audience and provide an opportunity for meditation. Singing such beautiful works as The Lamb by the late Sir John Tavener and Versa est in luctum by the Renaissance master Alonso Lobo was a joy in such a vast and atmospheric venue. We also had the chance to sing Ēriks Ešenvald’s short but magical piece called Stars which gave the singers a chance to show off their other musical skills including temple bells and wine glasses half full of water. Health and safety prevented us from filling the glasses with the real McCoy. Maybe next time… 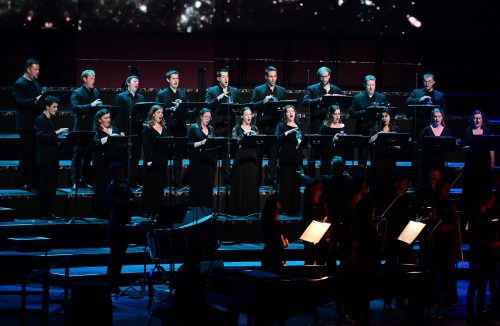 We then headed off to Switzerland and Germany for a few concerts with a programme of French music composed in a span of almost a thousand years, including music by Perotin and Messiaen, culminating in Poulenc’s Figure Humaine. This piece always gets our artistic juices flowing and sure enough singers delivered extremely powerful and exciting renditions that got the hair on the back of one’s neck standing up. It has to be said that we were helped by singing in yet more glorious venues – something of a theme for the following months it seems. The Franciscan Church in Lucerne and the Abbey at Kloster Eberbach are stunning and two more trips to Italy, Germany and Spain makes me realise just how little we know of all the glorious ecclesiastical spaces in mainland Europe. Milan, Turin, Hannover (where we enjoyed a post concert drink with members of Voces8 and also a founding member of The Real Group!) and then a very special church in Northeim kept the music flowing. This last concert felt very special, as we walked around the building singing Joby Talbot’s unique Path of Miracles noticing just what an emotional response this work gets from the audience. Many people just sitting with their eyes closed, visibly moved and many with tears in their eyes.

On our arrival back into Heathrow we jumped on a coach and headed away from London (and home) straight to the south west of England for a concert in the Parish Church of Lymington. This is a large church with an unusual layout so it was fun working out how we could place singers around the audience without having to actually ask people to move a little to their right or left! A few of us then sped off to Cowbridge in Wales where we serenaded them with wonderful and clever arrangements by the likes of Bob Chilcott, Richard Rodney Bennett and Alexander L’Estrange.

On one of several journeys to, from or going past Heathrow Airport, we paid a home visit to some of our Tenebrae singers – Windsor Castle! No, Princes William and Harry have not caught the choral singing bug (yet). Nick Madden, Ben Alden, Tom Lilburn and Simon Whiteley are all members of the Choir of St George’s Chapel and so live in a beautiful setting at the west end of the castle (opposite end to – and as far away as possible from – HM the Queen!) known as Horseshoe Cloister. We enjoyed a cup of tea and some sandwiches (cucumber of course) and then thought we may as well trot over to the Chapel and give a concert…  I’m hugely grateful to Martin Denny, Director of the Windsor Festival, who invited us back so soon after our last performance there and for giving me the rare opportunity of saying to the singers “we’ll continue this rehearsal in the Dungeon”. It’s great to have singers who know the building so well and can tell you with pinpoint accuracy the very best spot from which to sing. It’s a magical setting and wonderful for us to get to sing so close to home: a 30 second commute home after a gig isn’t bad eh chaps?! Lovely to attend Evensong too (at which the aforementioned singers were all present of course) in the break between our rehearsal and the concert. James Vivian is doing a fabulous job with the choir at St George’s, especially the boy choristers, who sounded on great form.

The last thing to mention is our trip to Santiago, the final destination for millions of pilgrims each year wanting to pay homage to the final resting place of the bones of St James. We performed three concerts for our hosts The Martin Randall Travel Company in staggeringly beautiful churches, all blessed with a perfect acoustic for choral music. We sang Thomas Tallis iconic motet in 40 parts Spem in alium and for this we were joined by an assortment of Alumni from The Choir of Clare College, Cambridge. This was a rare treat for me, to perform such large scale works as Spem and Brumel’s Earthquake Mass and I sincerely hope we’ll get an opportunity to work with the Clare Alumni again soon. Many thanks to Graham Ross for organising it and for choosing such a great team. To crown what was a great month for us we performed Path of Miracles one last time in its spiritual home of Santiago. Occasions such as this for us musicians don’t come along that often and I personally will treasure the memory of that performance.

Well done to all of the singers and management team who were superb throughout: not a ball dropped, a note fluffed, a bus missed… ermm…. 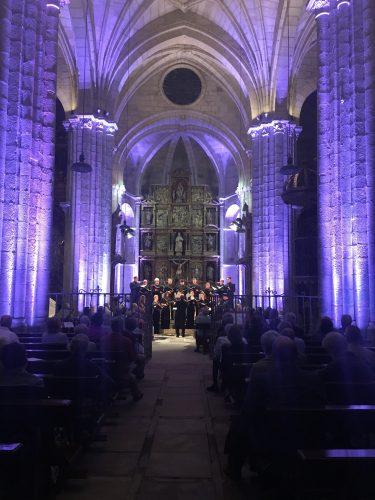