Any day which begins with an 05:00 alarm is met with some trepidation by singers. Couple that with the previous evening’s post-concert reception and there were some groggy heads on the early morning bus to St Louis airport.

We flew back to Chicago before catching a flight to Dallas. Upon arrival at the hotel, many of us went out in search of food, with nearby tacos proving a popular option. We then headed to Highland Park United Methodist Church for rehearsal. Although my organ-based questions in the quiz were met with some castigation, I did some research on the church’s instrument and it’s a rather fine Dobson (same builder as Merton College, Oxford), built in 2009. Andrew can be seen posing in front of some of the 32ft pipes. 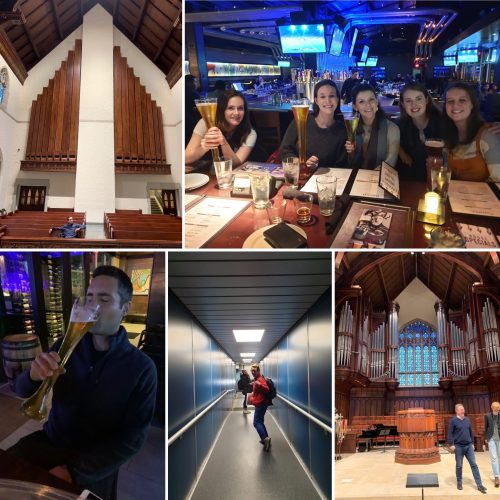 In some downtime before the concert, Nigel re-discovered his medium-pace action and flung bottles of water around the room towards various members of the choir, almost taking out the evening’s soloist, Martha (not to be confused with Dame Sarah C). Heroically, Jimmy hurled himself towards the incoming flagon and, like former Liverpool goalkeeper Jerzy Dudek (Instanbul, 2005), intercepted the surprise package.

Our performance seemed to go down well with the Dallas public. Various audience members took a punt as to the authorship of the encore: Edward Elgar and Morten Lauridsen topped the polls.

Those that had visited this area of Dallas before were wise to the local drinking hole (Adrian Peacock: “The air is rather dusty around here – I’m parched.”) With thanks to the Hyatt Hotel Shuttle, we arrived at the Yardhouse, and swiftly ordered a round of their finest half-yards of beer. There were over 50 to choose from, all expertly kept and extremely delicious. Despite this, Nigel ordered a yard of Kronenburg 1664. In total, the choir managed to rack up around 11 yards, which is approximately 10 metres – half as long as a bowling lane, or two times as tall as a giraffe. 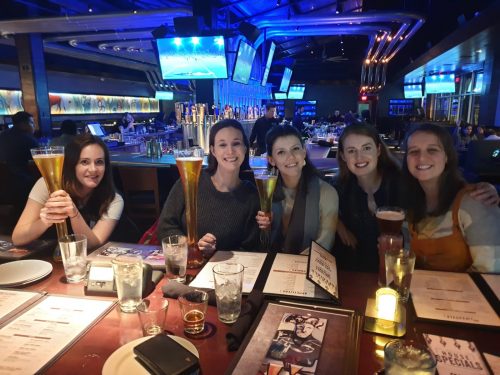 The following morning, we headed to Dallas airport for our second two-flight day on the trot. Possibly the only advantage to taking two flights is two spins of the snacks roulette wheel: pretzels, stroopwaffel or cookies. Some chose to stock up in the terminal, with Beth absolutely nailing a tub of glazed munchkins, and Jimmy proving that he has room for eight chocolate fingers, not that anyone doubted this to start with. Perhaps his KitKat had melted, because he had a slight sense of humour failure when the cabin crew’s tried to put his carry-on case in the hold, storming off the plane and demanding it be returned to him as there was in fact space in the overhead lockers – a little victory.

And so, after a brief stop-off in Denver, we landed in Salt Lake City. When we arrived at our hotel, various forms of exercise ensued: Fiona and Hannah went for a swim; Nick ended up in the gym; Katie and I had our brain gym in ordering curry for ten from the Bombay House. We headed downtown to pick up the food, visiting a local supermarket for beverages and dessert along the way. General Manager Alex took charge of proceedings, marching an 18-pack of Corona around the streets of Provo shouting ‘Passion and Pints’ at the top of her lungs – branding on point.

Around the same time, several of the chaps headed to a local Dive Bar: A. Beuford Gifford’s Libation Emporium. They drank some beer and watched some football (Andrew Mahon: “The football game was played in Mexico, at a higher altitude than we are currently”). Tom engaged in a lively debate with some of the local clientele, and despite some initial cultural differences, hopefully enhanced negotiations for the US-UK trade deal.

Back to the curry, though not for long as it was soon demolished by the hungry singers. Various card games ensued, with Monopoly Deal being played concurrently with S***head. One rule introduced was to say the alphabet backwards if a Jack was played, which was fine for Katie and Jimmy who had learned this at school, and near impossible for me and Vic who hadn’t. Afterwards, we relaxed with face masks and cherry cola, before heading to bed for a relatively early night.

Such was the fall-out from the curry the following morning, this blog is being delivered slightly late, for which I can only apologise. It’s bhuna great tour so far, and with three concerts to go we’re now on the home stretch. Over to Hannah C for the rest of our time in Utah… 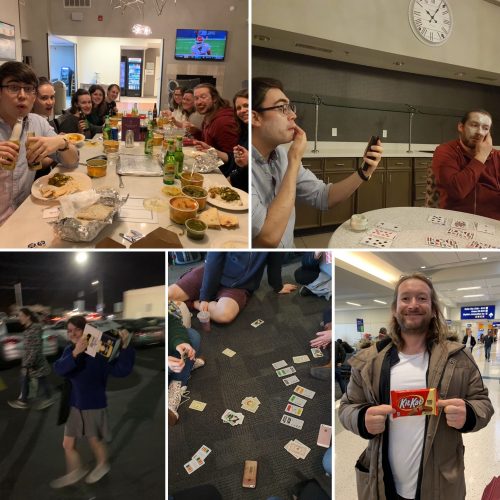