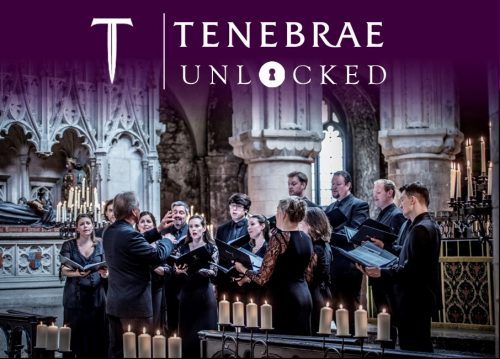 We are delighted to introduce Tenebrae Unlocked, a new series of short concerts filmed in October in the church of St Augustine’s Kilburn – sometimes referred to as the ‘Cathedral of North London’. After a very difficult year, it was an immense joy to be able to spend three days working with our wonderful singers and a world-class production team on this stunning series of films.

Following the popularity of our recent film of Bruckner’s Locus iste, we are excited to bring you the second concert in our series: a performance of motets by Brahms, Bruckner and Reger. Seamlessly entwining old and new, these works emerge as masterpieces of the sacred style in the nineteenth century. The inclusion of two pieces by the slightly younger Max Reger is a long-term ambition of Tenebrae’s – these stunning works have long been on Nigel’s wish list…

Tickets will be available through our online shop from 7pm GMT on 4th December. Each ticket allows unlimited access to stream this film for 30 days through your account, and supports Tenebrae as we face ongoing performance cancellations, and a significant loss of income as a result of the pandemic. Tenebrae Unlocked series tickets are available now. For series ticket-holders, the film will appear in the ‘Your Films’ page once you have signed into your account.

A portion of proceeds from our full CD recording of Brahms and Bruckner Motets goes to Macmillan Cancer Support. If you enjoyed this film, we would be delighted if you would consider purchasing a CD or download.