On Monday 8 July, we will renew our successful artistic partnership with the London Symphony Orchestra for a performance in St. Paul’s Cathedral, as part of the City of London Festival. The concert reflects the paradoxes of war and peace and celebrates the transformative power of words and music, opening with Estonian composer Arvo Pärt’s elegy to Benjamin Britten. Britten’s own solo oboe work will be performed in various parts of the Cathedral, interwoven with Josquin’s Missa L’homme armé – one of the most uplifting and famous Renaissance settings of the Mass, based on a crusading ballad, the Armed Man, which was Medieval Europe’s most popular song. Then follows Strauss’s Metamorphosen, a moving response to the destruction of Munich in the Second World War; Samuel Barber’s most popular and expressive work, the Adagio, will be heard in a unique version approved by the composer’s estate for this one-off performance, bringing choir and orchestra together and giving the concert an unforgettable close.

Tenebrae and the London Symphony Orchestra first joined forces in 2012 for a recording and concert performances of Fauré Requiem, which was released on the LSO Live label to extensive critical acclaim. Described by Gramophone Magazine as “the very best Fauré Requiem on disc”, the recording has received five star reviews. 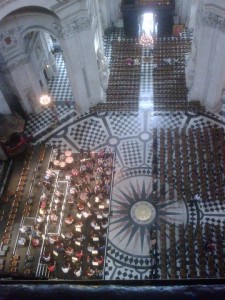