My very first appearance with Tenebrae was back in 2006 for some of the sessions for the Allegri Miserere recording. I’d been at Westminster Cathedral for just under a term and had had my Tenebrae ‘audition’ when Nigel had stepped in for my colleague for some men-only services! During that year I started to get asked for more projects and, by somewhere in 2007 or 2008, was part of the regular team. Around then, I switched from being a computer programmer (I’ve always been simultaneously a computer scientist and singer) who was also a Cathedral lay clerk to full-time consort and solo singing. When Tenebrae’s co-founder Barbara Pollock died in 2010, I did a little bit of work in the background keeping Tenebrae’s finances and technical stuff ticking over, but by 2012 I was moving more and more towards solo concert singing, especially in Germany and the Netherlands. 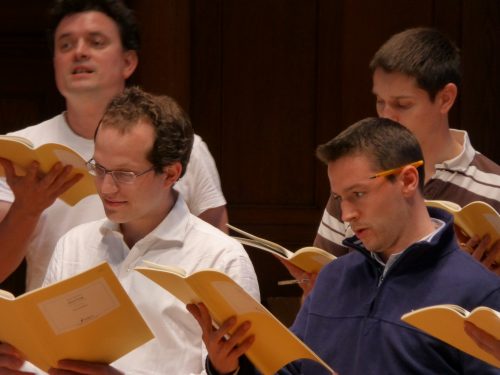 And so, having had a look through my diary, I find that some new-baby-induced illness in 2014 means that the last time I was in a full Tenebrae concert was also to perform Chichester Psalms at the Cadogan Hall in 2013! I was already hatching plans to record it, although at that point with the more modest aim of tackling the organ version rather than the full symphony orchestration. That of course fitted well with older plans of Nigel’s, and after various iterations of programme ideas, the concept for ‘Symphonic Psalms and Prayers’ was born. At that stage, though, we only had enough funding for the Bernstein and some towards the rest of the disc, but alas not enough to be able to commit the plans. However, my hope had always been to have the recording ready for Bernstein’s centenary year, and it was lucky we’d started planning so far in advance as these things always take time to bring to fruition. In July 2016 we were finally in Maida Vale Studio 1 with the BBC Symphony Orchestra for the first of the sessions for recording the entire disc. 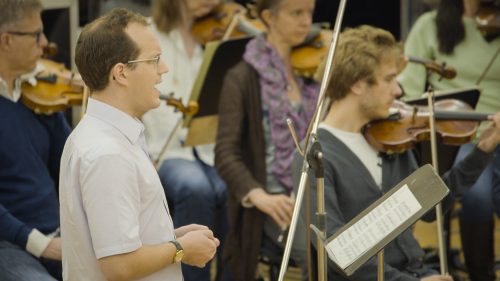 Things never go entirely to plan, and I had unfortunately discovered during a concert in June that year that I was suffering from a detached left retina. Fortunately by the second week of July when we started recording, my eye was healed enough not to look too horrific – although I don’t expect many recording sessions have ever been undertaken while on that level of prescribed steroids and painkillers! Of course, many of my delightful colleagues will gleefully point out that being unable to look up didn’t present much of an obstacle for me, as I’m not renowned for watching conductors anyhow; a scandalous accusation which of course has no truth to it. Medical dramas to one side, it was fantastic to be working with Tenebrae again – something which I’m certainly looking forward to doing again this week. I remember an experienced colleague who was working with Tenebrae for the first time remarking that it’s not so much that Tenebrae achieves artistic accuracy and perfection which others don’t, it’s that Tenebrae does it all the time, right through the concert. There’s always been an intangible magic to working with this group which I do miss being part of, and which I look forward to feeling again next week. Of the two Bernstein pieces we’ll be performing, Chichester Psalms always has a special place for me, as it’s the first piece I performed as a countertenor, nearly 20 years ago.