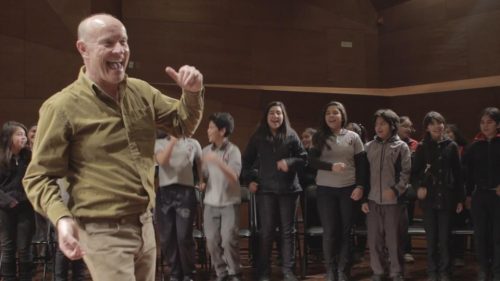 In advance of our upcoming concert On Eagles Wings, we caught up with Richard Frostick, director of our choral development partners, The Music Centres, who will be performing with us on Thursday evening.

Tell us a little bit about yourself and your background.

I was a very keen boy treble and sang all the time in church and at school.  I think this gave me a head start because I learnt to read music very early and was exposed to a wide range of choral music.  I also loved playing the piano, so I was the happiest boy in the world when I got in to the Royal Academy of Music to do a joint first study of singing and piano!  I became very interested in classroom teaching after I left the Academy and did a PGCE and then a Masters in Music Education at the University of London Institute of Education.

I’ve worked in just about all phases of music education, from Under 5s, to primary and secondary, and higher education.  I particularly enjoyed my five years teaching singing workshop skills at the Guildhall School of Music and Drama.

I became freelance in 1997 and since then have worked across the UK and around the world as a singing workshop leader and choral conductor.  Highlights include being appointed Artistic Director of Youth Music Voices, a wonderful youth choir that formed part of the Cultural Olympiad and performed throughout 2012, and my current job as Artistic Director of World Voice.  This groundbreaking British Council project is now in 17 countries and has reached over 1.5 million children.  You can read about it online by searching for British Council World Voice; the website has explanatory articles and films.

You’ve founded two highly successful music centres based in London – can you tell us more about their work and your role within those organisations?

I set up the Islington Music Centre in 1992 while I was still working as an adviser.  When I went freelance I set the Centre up as an independently run organisation with its own board of trustees and charitable status.  We survive on parental subscription and charitable grants.  The aim of the Centre is to bring high quality musical experience within reach of all children and young people who are willing to make a commitment and work hard.  Subscriptions are waived for those who can’t afford them – all pupils can attend regardless of their ability to pay.  In the 26 years of our existence we have notched up an impressive list of performing credits, including singing at six BBC Proms, at 10 Downing Street and on numerous tv and radio programmes.  But the core of our work takes place at the Centre itself, giving pupils from a wide range of backgrounds an opportunity to develop their musicality through singing.

Five years ago we opened a second Centre in Southwark and are about to take in another 100 keen young singers after our recent auditions there. 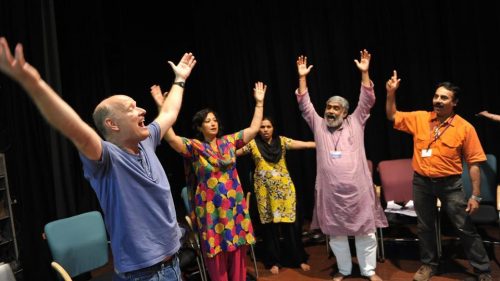 How would you encourage children interested in music to take those first steps and get involved?

I would advise children and young people to focus on the ‘thing itself’ – singing.  So many youngsters want to be like Adele or Beyonce, but we already have these singers – we don’t need replicas!  So try to find music providers that have integrity and a good track-record in the actual teaching.  Don’t go for places that focus on ‘wannabes’ – all they’re interested in is getting children on to the West End stage,  they rarely care about developing the child’s talent.  Try to find what is beautiful about your own voice and develop your style and technique from there.

Are there any upcoming projects that you’re particularly looking forward to?

Our performance with Tenebrae on 7 April is creating a great deal of excitement!  Giving children and young people glimpses of the professional world is so important. They learn that you need commitment and hard work if you’re going to achieve the highest standards.

We’re also looking forward to our big Summer Concert and more auditions over the summer.

Alexander L’Estrange has written a fantastic variety of music for children and young people such as Zimbe! and Ahoy! – what do you think it is about his music that is so appealing to the young voice?

Alexander really understands the young singing voice and knows it’s capabilities.  He writes music that is accessible but also challenging; young people don’t mind working hard if they feel that they will be able to achieve a beautiful performance.  He never patronises young singers – the number one mistake when working with young choirs.  When I first played our pupils a recording of Panis Angelicus there was a 10 second hush at the end and then many of them let out a big spontaneous sigh.  It’s a rare gift that can provoke that kind of response from young singers.

Don’t forget to join us on Thursday 7 April when Tenebrae will be performing a programme of sacred works by Alexander L’Estrange, joining forces with Richard Frostick and The Music Centres to perform ‘Panis Angelicus’.