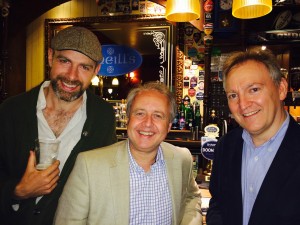 Another busy month with some spectacular highlights: apologies in advance if this sounds like I’m enjoying several trips down memory lane! Firstly a concert in the beautiful church of Swaledale. I’ve rarely had the chance to visit this stunning part of England and as soon as we were driving through the glorious scenery it made me want to organise a holiday there! A small team of our finest singers made up the Consort for this performance of some of my favourite music in the English Renaissance repertoire: of particular note was Mundy’s ‘Vox patris in cealestis’. This is a piece I sang many times around 25 years ago with the Tallis Scholars and to come back to it after so long was a treat. The singers were all on fantastic form and a special mention must go to Emilia Hughes and Emma Walshe who both stepped in at the last minute for sopranos struck down by illness. They sang beautifully and made a sensational sound together at the top of the Consort.

Reading
We gave yet another performance of our Russian Treasures programme at the rather splendid concert hall in Reading. It was terrific as always to get such great feedback afterwards and to hear so many people exclaim with delight over hearing Adrian Peacock, our bass Cantor, do his thing with all the rumble-range moments! Two happy surprises after the concert; firstly, seeing my esteemed former alto colleague in The King’s Singers, David Hurley, with whom I spent a very happy and rewarding few days producing a disc of wonderful music by Palestrina for the King’s Singers. The group was on sensational form and were amused when once or twice I found myself gravitating towards the second music stand from the left rather than the production room! Old habits…! Secondly, it was a delight as always to see our US agent Christie Starrett (married to another former KS colleague, Gabriel Crouch, who we were lucky enough to have singing with us for concerts this month). It gave us the chance to catch up on all the latest information regarding our forthcoming tours to the USA. We’re there this October for 8 concerts and then again in the autumn of 2016 for performances of the Messiah, amongst other repertoire. Can’t wait.

Stour
More Russian glories at the gorgeous church in Stour which is run by countertenor Alfred Deller’s son, Mark, with the chance to catch up with yet another former King’s Singers alto, Al Hume (they’re two-a-penny these days!) and another of our agents abroad, this time from Germany, Erika Esslinger. Lots of funny stories were shared from our King’s Singers past, all of which had our younger singers rolling their eyes heavenwards and heading for the nearest exit…

City of London Festival Wren Choral Marathon
Just one weeks ago we gave a short recital in a fabulous day of choral recitals in all of London’s churches designed by Sir Christopher Wren. We were lucky enough to sing in the amusingly named church of St Andrews-by-the-Wardrobe, which is found somewhere between Blackfriars and St Paul’s Cathedral. Having thought this would be very much an informal concert of only 40mins I was tempted to say we could wear casual clothes but was glad I didn’t once we realised the place was packed. Our changing room was the gallery at the west end of the church and the audience members spilled over into the galleries at either side of the church too so they had something of a ‘preview’!

Looking Ahead
Now looking forward to going back to Thaxted to sing a programme which has many of my favourite choral works and in particular, a setting of ‘Ave Maria’ (for 8-part upper voice choir) by Gustav Holst. Holst was heavily involved in musical matters at the church for many years before he moved to London. He organised a Whitsun Festival in 1916 but this sadly stopped after 1918, with the Festival only restarting in 1980.

We’re also very much looking forward to another concert in the staggeringly beautiful abbey of Lessay and spending some time with one of our Patrons, Sally Payton. Thanks to Sally this will be the third time we’ve sung here and we’re very excited to be working with local choirs and singers on some of the music from our concert programme, namely Brahms and Bruckner. This is something we’re hoping to build up over the next few years to eventually give concerts together with choirs and orchestras from all over France.