What a treat to go to Corsica for a concert! After 11 hours we finally made it to our hotel but the next morning were greeted by glorious sunshine and a beautiful white sandy beach and warm sea water to swim in. Doesn’t get much better than that. Or so I thought until Nick Madden and Nick Garrett texted us saying they’d found a beautiful spot for lunch in the medieval citadel (see picture below). A tiny but beautiful church was the setting for our fun programme of arrangements by Bob Chilcott and Alexander L’Estrange as part of the Calenzana Festival. It’s always a joy to sing their music and in such special setting it was even more magical than usual. 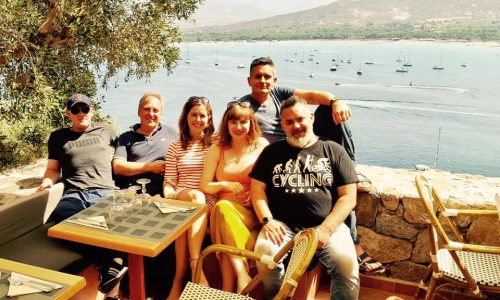 This was followed by a trip to Austria for the Trigonale Festival where a dear friend Stefan Schweiger is the Director. Yet again, he chose what seemed like the perfect venue for our programme of English Renaissance gems. As always, it was a treat to have Gabriel Crouch with us and also another singer from previous years, mezzo soprano Clare Wilkinson, who was sounding as glorious as ever. I then had a little trip to Truro Cathedral for some workshops with the boys, girls and choral scholars from the Truro Cathedral Choir there and their amazing Director of Music, Christopher Gray. This was soon followed with another lovely couple of sessions with the choirs at Downside School under the direction of Julian McNamara and an excellent amateur group called the Swan Singers run by our Regional Ambassador for the West Country, Tricia Rees-Jones. The next day we raced over to Exeter for our first appearance in Exeter Cathedral. This was one of my favourite Cathedrals as a boy and it was very special to return there with Tenebrae to perform Joby Talbot’s Path of Miracles. Lovely to spend an hour or two with Michael Graham and the Exeter University Chamber Choir working on some of their repertoire for this term and then to sing Owain Park’s Footsteps with the local chamber choir Antiphon and their director Matthew Cann. How nice (and a little scary) to see all the organists from the Cathedral singing in the choir! One of our Associate Artists, Bethany Partridge, was a chorister there and it was great to see so many of her old friends come to see and support her. Then we ventured even further west to go back to Truro and give a performance with the boys and girls of the Cathedral Choir. What an amazing cathedral this is. The acoustic has to be one of the very finest we’ve ever sung in and the audience’s reaction at the end was terrific. Thank you so much to everyone who for supported our debut performances in both Exeter and Truro. We hope to be back again very soon! Who knows, maybe even a little west country tour…? Now wouldn’t that be fun. Wells Cathedral, Bristol Cathedral… any others? 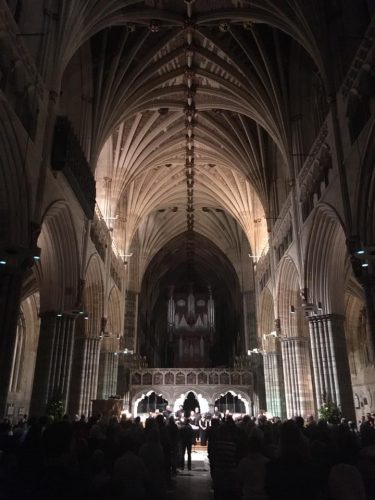 A standing ovation for Path of Miracles in Exeter Cathedral, 15 September 2017.

Owain Park’s Footsteps with the boy and girl choristers of the Truro Cathedral Choir, 16 September 2017

Afterwards, I had a few days off to try and adjust to my new house just outside Cambridge and to help the children settle into their new schools. Monty, our enormous golden retriever, is in heaven as he now has his walks in vast fields that are home to rabbits and pheasants. Our regular walk is in front of the house, up a hill stretching as far as the eye can see and, after 20 minutes when you reach the top you can see (on a sunny day only of course!) the four turrets of King’s College Chapel and the tower of St John’s College Chapel. All rather dreamy. 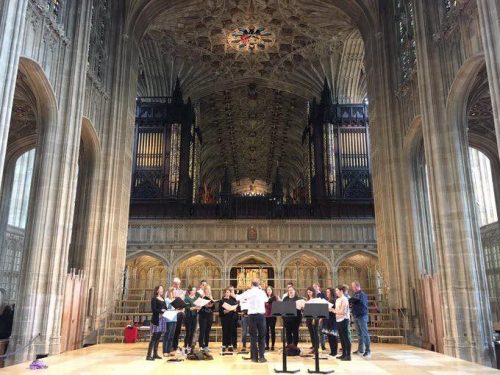 Back to work! A wonderful concert in the stunning St George’s Chapel at Windsor Castle as part of the Windsor Festival. We sang our programme of Russian Treasures and had the bass line-up from heaven, who, together with the rest of the choir, were on top form singing to a packed chapel. The morning after, we had a quick dash down to the Rye Arts Festival and a performance of the Victoria Requiem, amongst other Spanish Renaissance gems, in this beautiful town. Thank you to the organisers for the amazing supper – that gave us even more reason and good cheer to sing our best for the church which seemed to be absolutely bursting with people in every nook and cranny! To end this, our busiest September since we started 15 years ago, we jumped on the train to Scotland the morning after Rye, to give another performance of Owain’s Footsteps with the National Youth Choir of Scotland (and their terrific director Christopher Bell) and Joby Talbot’s Path of Miracles in the stunning St Mary’s Parish Church, Haddington in the Lammermuir Festival. The Artistic Director of the festival, James Waters, and his team are a delight to work with and they make our lives so much easier when everything just seems to be ready and exactly as you want it even before you sing your first note in the afternoon rehearsal.

Another few days to rest now before the trip to Australia to perform as part of the Melbourne Festival… my poor back is not going to enjoy that journey for sure!