So much to write about for July, which, whilst incredibly busy was artistically one of the most rewarding I can recall.

It began with just a few of us singing our lovely programme of music mostly by Bob Chilcott at Champs Hill Folly. This is a very special place for me as it’s the home of very good friends Mary and David Bowerman. Many years ago they converted their barn into a wonderful small concert hall and have dedicated its use since then to the pursuit of musical excellence. I have had the pleasure of being the producer for many recordings there over the years for their own record label Champs Hill Records, including two for the fabulous mezzo soprano Kitty Whately, who is coming to sing our alto solos in the Messiah on 3rd December at the Cadogan Hall – do not miss it. I have also produced for Roderick Williams and Allan Clayton to name but a few who I’ve recorded there. A lovely audience, a really relaxing evening and a nice chance for me to sing and spend some time working alongside my wife, Gracie!

We then spent a few days finishing off our recording with the BBC Symphony Orchestra for our upcoming release, ‘Symphonic Psalms and Prayers’. This is something of an epic project for us in terms of its scale. We began last year with Bernstein’s Chichester Psalms, Schoenberg’s Friede of eden and now have completed the project with Stravinsky’s Symphony of Psalms and Zemlinsky’s setting of Psalm 23. Each piece on its own is pretty huge and the singers and players showed their true skill in easily adapting to the technical and musical demands of each work. Standing in front of everyone as they threw themselves into the Stravinsky was a career highlight for me – the overwhelming joy from everyone as we played the 1st movement of the Chichester Psalms was something I’ll never forget. Anyone who was standing was dancing along with all the syncopated rhythms and it had exactly the feel I’d wanted – it needs to be precise but then you let the music take on the sheer delight of its integral rhythmic energy and excitement. I can’t wait to hear this one. 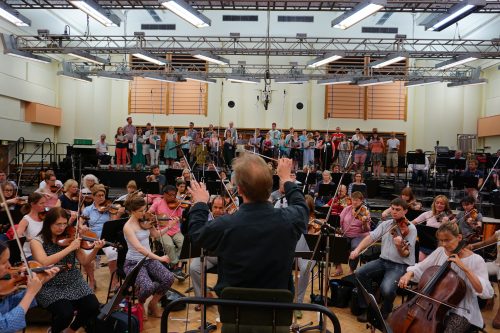 Tenebrae and the BBC Symphony Orchestra at the BBC Maida Vale Studio, July 2017.

A very special day for everyone involved with Tenebrae was 7th July. In 2005 the dreadful events in central London meant our world premiere of Joby Talbot’s Path of Miracles had to be postponed. We had commissioned this piece with the kind support of our Tenebrae’s co-founder Barbara Pollock. Kathryn McDowell, then Director of The City of London Festival, had asked us to give the first performance. In our 15th anniversary year this was a chance to almost re-enact that day and put things right, this time as part of the Voices of London Festival. I’m not sure I’ve ever seen the beautiful church of St Bartholomew-the-Great so full and it seemed as if the audience were all around us and extremely close. It all lead to an amazing evening – one in which the music just flew and the energy of the singers really took over. The reaction at the end was, according to all present, extraordinary and instantaneous. Memorable for so many special reasons, not least of which was having Joby with us that night. He’s given the world a truly wonderful piece of music that is a perfect evocation of the Camino de Santiago. If you’ve not heard (or seen) this piece then you need to make every effort to, you won’t be disappointed. 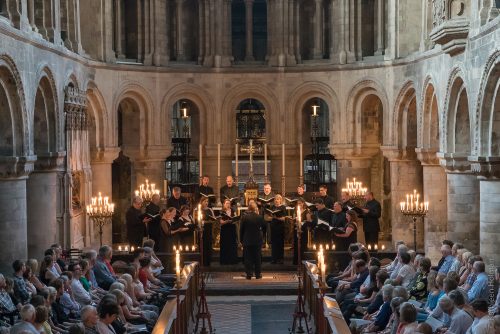 After the performance of Path of Miracles (POMS) at St Bartholomew, we travelled west to Tewkesbury Abbey to perform in the Cheltenham Festival. I sang in this beautiful building many times as a boy (once doing the high C’s in the Allegri Miserere) and remember that it always had a very special atmosphere. The acoustic is possibly the finest for choral music anywhere in the UK. Every part is always perfectly clear and when the choir really opens up the building just takes the sound and makes it fly to all every corner. As we finished the piece, singer having wandered off to different parts of the Abbey the atmosphere was electric. As we all made our way back to the stage for the impending applause it took what felt like a whole minute before anyone clapped and then, boy, the place erupted! Again, if you don’t know this piece, you just have to come and see it. 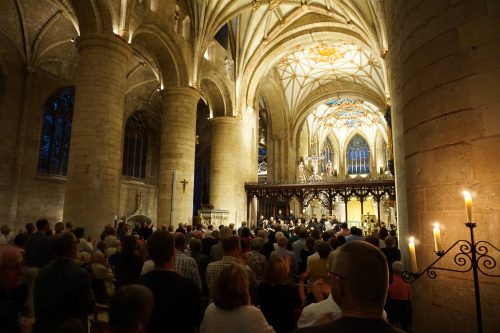 Standing ovation for our Path of Miracles concert on 12 July 2017 at Tewkesbury Abbey.

A few of us had a quick jaunt over to Santander to reacquaint ourselves with our Medieval Chant programme. This involves lots of processing and culminates in a rendition of Tallis’s Lamentations. It was a huge contrast to the exuberance of POMS in recent outings but very intimate and spiritual. Then we dashed home to join the our other singers for a performance of our Brahms and Bruckner programme in the glorious Thaxted Parish Church as part of the Thaxted Festival, together with trombones and organist James Sherlock. I always enjoy performing this music, although I know it puts the singers through their paces like nothing else. The highlight for me was Brahms’s gem Geistliches Lied. The choir are on stunning form and yet again, we had a wonderful reception from the Thaxted audience, whom we’re getting to know very well now, this having been our 4th appearance there over the last several years.

Then I was lucky to have a few days of holiday in Devon with the family and get a chance to relax and slow the pace of life down a little – oh, hang on, Ella and Josh were there so scrap the relaxing/slowing down bit of that! Endless dog walks, bike rides, swimming and surfing in the sea is more the kind of thing. Great fun. I then raced back to London for a trip to Menorca. What a stunning place this is. It was one of the most beautiful towns I’ve ever visited and one of the most extraordinary and surreal venues I suspect that we’ll ever perform in. It was all so out of the ordinary that I was, well, not quite with it, and this is the nicest way I can describe it. I had a spectacularly embarrassing moment (some of the younger singers said more unkindly that it was one my finest ’senior moments’) at the start of the second half…. you’ll have to ask the singers what happened! We were put up in the most gorgeous house with the kindest hospitality imaginable. Magical. I definitely want to go back there. 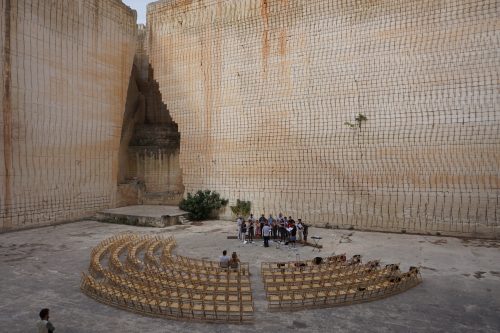 Then to finish off, we gave a POMS concert in the Chapel of Trinity College, Cambridge. I sang in this chapel as a soloist when I was much younger and knew the acoustic was generous but when we got there it blew me away. As we moved around the venue it seemed as if our sound just got louder and louder – our ears were buzzing with all the harmonics being created. It was very exciting and it made for a hugely enjoyable concert. Again, our audience were a delight and so attentive that the place was as quiet as it had been in the afternoon when we were rehearsing and it was completely empty. Special mention for all the Cambridge Summer Music Festival team who looked after us so well. Thanks to you all so much.

And so, on to September. No rest for the wicked eh?! At the start of the month, we head off to Austria with a small team for a lovely program of Gibbons and Purcell in the Trigonale Festival. Then, we look forward to performing POMS in what will be our concert debuts in the cathedrals at Exeter and Truro and after, we shall be making a return visit to the magical church of St Mary’s, Haddington for the Lammermuir Festival. Oh, and in between all that we nip to the St George’s Chapel in Windsor Castle with the Windsor Festival for an outing of our Russian Treasures programme – low bass’s special evening! We also will be making our debut in the Rye Arts Festival, where we will be performing our Spanish Glories of the Sixteenth Century programme. We hope to see you somewhere soon at one of these events.