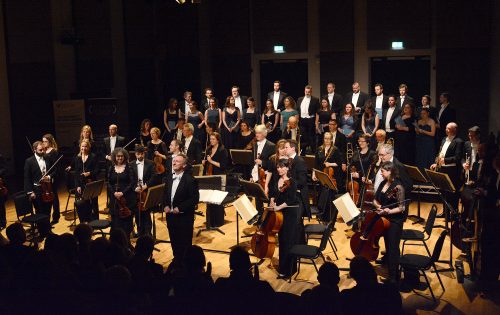 Following on from a jam-packed few weeks, I am very much looking forward to our inaugural Holy Week Festival which will take place 9 – 15 April 2017. We have some of the finest choirs and most exciting vibrant vocal groups such as VOCES8 and The Gesualdo Six performing; The Hanover Band will bring Rossini’s dramatic Stabat Mater to the stage and Alamire will perform music by Thomas Tallis that hasn’t been heard for over 450 years. On the evening of Wednesday 12 April Tenebrae and the Aurora Orchestra will perform Fauré’s Requiem preceded by what will be a personal highlight for me, hearing the sensational violinist Max Baillie play Bach’s iconic Partita No.2 in D minor interspersed with Bach chorales. In the final movement, the Chaconne, we’ll hear lines sung from Bach’s Cantata no.4 ‘ Christ lag in Todes Banden’. There’s a fascinating theory put together by German scholar Helga Thoene that Bach left a secret numerological code which tells us he was thinking of the main melody in the chorale as he composed the Chaconne and that this is in fact a dedication to the memory of his first wife, Maria Barbara.

Of course the purpose of the festival is to bring together in one venue the finest music ever composed for Holy Week, in part through celebration of key liturgical events such as the Offices of Tenebrae which occur late on the evenings of the Triduum Sacrum (Three Holy Days). These will be performed by candlelight and will hopefully provide anyone taking part a chance to lose themselves in the dramatic narrative of Victoria’s stunning settings of the Tenebrae Responsories. The first of these will take place after the Fauré Requiem performance so I am looking forward to a very special atmosphere for this liturgical sequence in which we’ll be joined by our cleric-in-residence, Paul Dominiak, who is the current Dean of Chapel at Jesus College, Cambridge. On another personal note I’m also hugely excited about my debut with The BBC Singers, a choir I had the privilege of singing with on many occasions as a youngster, and they will open the Festival on Palm Sunday. I do hope we’ll see lots of people there over the course of the whole week to enjoy and experience an intense and deeply spiritual time and I hope the week of concerts and workshops intertwined with liturgical events all in one space will make it easier for people to hear all the finest music they could wish for at the most intensely dramatic time in the Christian calendar.

Henry and Helen have been busy in the Tenebrae office of late (not that they aren’t always busy of course!) launching a series of performances throughout our fifteenth-anniversary year of one of our most important commissions since the choir began in 2001, Joby Talbot’s choral odyssey Path of Miracles. Together with an exciting new commission called Footsteps from rising composer Owain Park. We are looking forward to the imminent release of this new work, which for the recording we were joined by the very talented National Youth Choir Fellows. We are performing this programme all over the UK and abroad in many wonderful venues, including Owain’s alma mater Trinity College, Cambridge. A key date for your diary is 7th July 2017. Path of Miracles was due to receive its world premiere on this date back in 2005, the day of the London terrorist attacks. The venue was the utterly stunning church of St Bartholomew-the-Great but of course, given the close proximity of that day’s awful events the premiere had to be postponed. It feels incredibly poignant to be going back to what has to be London’s most beautiful church for another performance of Path of Miracles and for the concert to serve as something of a dedication. St Bartholomew’s is only a small venue so please don’t delay in getting your seat booked! Joby and myself will be giving a talk before the concert all about the creation of the work and the epic journey it is inspired by, the pilgrimage to Santiago.

In other news, most recently I’ve absolutely loved the chance to sing again in a small consort, together with my lovely wife, Grace Davidson, Joanna Forbes L’Estrange, Nicholas Madden, Gabriel Crouch (my former colleague in The King’s Singers), Stephen Kennedy and bass extraordinaire Nick Garrett. We sang in the amazing venue of Landmark Arts Centre in Teddington – if you’ve never been there then it’s definitely worth a visit as the venue is basically half a Cathedral of French Gothic design! We then had a simply sublime time in Portico, Portaferry with what can only be described as legendary hospitality from promoter Neil McClure. A lovely warm audience in a really fabulous venue that Neil has worked tirelessly over in the last 10 years to save and subsequently renovate. An extraordinary place and an extraordinary guy!

Amidst all of this warbling I went back to the more familiar (and comfortable!) territory of the podium for Mozart’s Requiem. Our soloists, Katie Trethewey, Martha McLorinan, Nicholas Madden and Stephen Kennedy did us proud and it was a pleasure as always to work with the English Chamber Orchestra in what was for both organisations a ‘home’ gig at the University of West London in their new concert hall.

Next, we travel out to Oslo to perform as part of the 2017 Church Music Festival. I can’t wait! I’ve only been to Norway 3 times in my whole career and I always want to stay longer so hopefully another 2 days there will slightly start to redress things on that front!