And so after a couple of unusually quiet months for Tenebrae we dived straight into our Holy Week Festival at St John’s, Smith Square, full of energy and purpose. This year the Festival had a focus on the wonderful and highly atmospheric music of composer Sir James MacMillan, celebrating his 60th birthday this year. All the groups taking part performed beautifully and, with the exception of a couple of moments where mobile phones went off (grrr!), I think the calm but intense atmosphere was carried through the week incredibly successfully. Our late-night liturgical events seem to be growing more and more popular which I’m very pleased about. For the service on the Thursday night we sang MacMillan’s three settings of the Tenebrae Responsories. We’d performed them on Radio 3 In Tune (listen back here) earlier in the week which was great but of course not exactly the setting or acoustic one would normally wish for when singing this kind of music. A bit of matchless banter from Sean Rafferty helped but it’s not quite the same as a candle lit church! Performing them liturgically created a very, very different feel. Interspersed by readings the pieces jumped out at the listener and became incredibly dramatic. I’m really looking forward to singing these pieces again in various programmes we have over the next year.

For me personally – and perhaps a little selfishly – the highlight was the concert Tenebrae gave with Britten Sinfonia on the evening of Good Friday. We sang Poulenc’s Lenten motets, followed by some Tenebrae Responsory settings by Victoria and then – with the composer’s blessing I hasten to add – segued into MacMillan’s extraordinarily powerful setting of the Seven Last Words from the Cross. Players and singers were clearly like a coiled spring as they gave everything and more in what I felt was one of our most highly charged performances ever. This is the kind of atmosphere I want for our Holy Week Festival. Our dear friend and singer Stephen Kennedy (you may remember I wrote about him earlier this year informing you all of the terrible news that he had suffered a huge stroke) was in the audience with his mum and dad and this in no small way gave us added incentive (as if any was needed!) to make this a concert to remember. James MacMillan stepped up to the platform for a much deserved bow and was rightly rewarded with a standing ovation. Anyone who can create something so achingly beautiful and dramatic as this work is to be treasured and revered. The choir was on brilliant form and we all thought the Britten Sinfonia and their Leader, Thomas Gould, were just sensational and a joy to make music with. On behalf of everyone at team Tenebrae and all the HWF audiences I extend my sincerest thanks to James for his participation over the whole week, including a marvellous workshop and an excellent concert with the BBC Singers. Can’t wait to start planning next year’s Festival. Actually give me a couple of weeks… 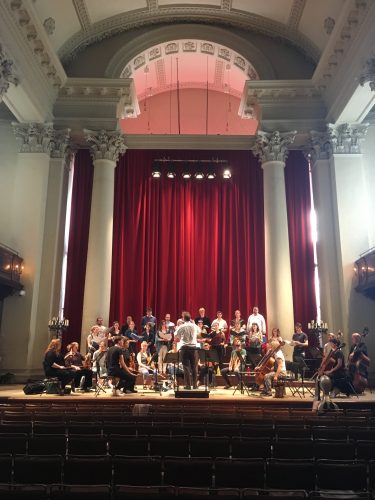 Once everything had settled down at St John’s Smith Square we raced up to Snape Maltings for another concert with the Britten Sinfonia and perform Fauré’s Requiem. We always segue this from J S Bach’s Partita No. 2 in D Minor which was played for us by the astonishing violinist Thomas Gould. In the last movement Thomas is surrounded by an octet of singers who perform lines from Bach’s Cantata No. 4 Christ lag in todesbanden. According to German scholar and musicologist Helga Thoene, lines from the Cantata, referring to death and resurrection, were hidden within the Ciaconne and represent a personal memorial from the composer to his late wife Maria Barbara Bach. Thomas’s rendition of the Partita was so moving that one could have heard a pin drop throughout the entire work. It all made for a very dramatic and powerful start to Fauré’s Requiem, which was graced with beautiful solo contributions from Thomas again on the violin, soprano Emma Walshe and bass Jimmy Holliday. I really hope we can take the stage with Thomas and the Britten Sinfonia again soon. 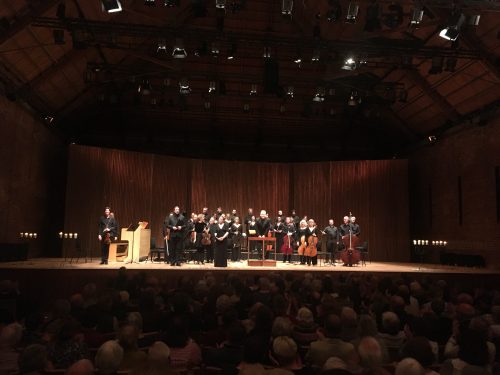 Now we look forward to May when will we perform our Spanish Glories programme five times, including a concert in the stunning Chapel of King’s College Cambridge (for once my family will be able to attend what is for us a concert on home turf – although my son will have to sprint over from St John’s where evensong doesn’t usually finish until about 7.20pm…), Guildford, Newbury and Fairford Festivals and also Cremona, Italy. Other concerts take place in Sherborne Abbey (which has possibly my favourite acoustic in England!) and Norwich Cathedral, where we will sing with the Cathedral Choir. I very much look forward to working with their Director of Music Ashley Grote and returning to what was one of the very first venues in the UK to book Tenebrae for a concert back in 2002. I think this will be our 5th visit to the Cathedral and something like our 9th or 10th to the city. I hope we get to see you somewhere soon.