Happy new year to all. Hope you’ve put on loads of weight with excessive amounts of good cheer and the like and are now enjoying the effects after a cleansing January. I’m certainly not!

It is with a heavy heart that I write to you all with some awful news about one of our most gifted and well-loved singers, baritone Stephen Kennedy. In early January poor Steve had a stroke and has been in critical care since. It comes as no surprise to anyone who knows him that there has been a massive outpouring of affection and well wishes from fellow professionals and Tenebrae supporters the world over. Steve is very much a central character in the choir – our heart and soul – and his enthusiasm and love for music shines like a beacon every time we get together. I visited Steve last week and, whilst he’s clearly very poorly, he was definitely able to understand everything I was saying. At one point I asked him to pretend to play a C major scale and, quick as a flash, his fingers moved with the correct fingering, followed by a small groan as if to say “Come on, at least give me something interesting to play like Ravel’s Piano Concerto in G!” (something the two of us have played in the past in the version for two pianos). Thus far he has responded well to music and so, as soon as we have a green light from the doctors, a few of us are planning to go in and sing a few pieces to him. I will keep you all updated on Steve’s progress through this blog on the Tenebrae website. In the meantime we wish Steve a speedy recovery and send love, strength and support to his family. Come on Steve, we want you back with us as soon as possible.

The second bit of news, on a much happier note, is that our new General Manager, Alexandra Davies, has now started working for us. From a very strong field of candidates it was clear that Alex has what it takes – and much more – to continue the fabulous achievements of Henry Southern and the rest of our team, Esther Poole and Charlotte Nohavicka. Esther and Charlotte have already welcomed Alex into the fold and are currently helping her get up to speed on the million and one things we want to do over the next few years. It’s going to be wonderful working with these three extremely talented ladies and I look forward to ever increasing success for the choir whilst we are in their capable hands. Actually, this is not a bad time to publicly thank our brilliant Trustees too, who helped to find Alex in the interview process and who continue to help drive the choir and myself forward in establishing Tenebrae as one of the best choirs around. We couldn’t do anything without our amazing singers, though, so thanks to them too. I’m delighted to say that, whilst many of our regulars continue to work with us throughout the coming year, we recently had an excellent day of auditions in the search for some new Associate Artists, so you’ll be seeing some new faces in our midst as of September. Stay tuned for more news on them!

Musically it’s been a good but fairly quiet start to the year with a trip up to Leeds to sing Victoria’s beautiful Requiem in the Howard Assembly Room. This is a small intimate venue that, whilst certainly nothing like an ecclesiastical acoustic one would usually hear this music in, was particularly enjoyable for being able to hear every single detail in the choral texture easily. Very easily. I’d say it was quite tough for the singers but as always they made everything sound effortless, glorious and radiant! Our small consort team of singers then visited Southend-on-Sea for a fun concert of compositions and arrangements by some of the most popular names in the world of choral music, including Bob Chilcott, Alexander L’Estrange and Richard Rodney Bennett. 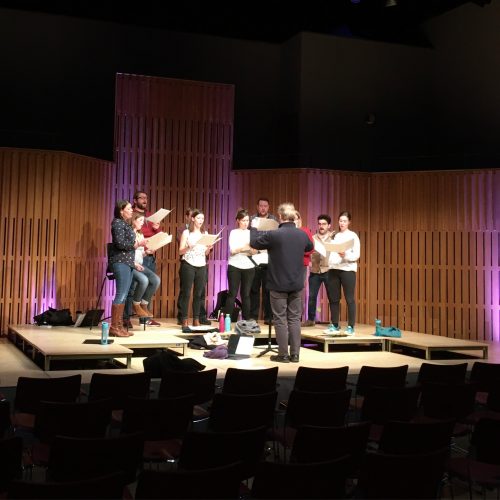 Then on to more majestic fare in Oxford Town Hall for a performance of Bach’s Mass in B Minor together with the Academy of Ancient Music. We’ve performed this piece with the AAM several times now, and I can’t tell you how much fun it is to perform with them. Stunning playing and such sensitive musicianship all contributes to allowing the choir to show us what they’re made of. The singers give their heart and soul to this music and I personally loved seeing several of them beaming during the concert whilst listening to others sing and play this brilliant music. The acoustic in the hall gave us some balance issues in the rehearsal, but once the place was full everything became clearer and we could let the audience hear every detail in this, one of the finest choral works ever composed (IMHO). Our step-out soloists were all wonderful as usual, and I particularly enjoyed Jimmy’s rendition of ‘Quoniam’ with the horn and bassoons. It’s not often you can hear all the quick notes in this aria because the part is so low for the singer, but Jimmy was on top (bottom?) form and it was a treat to hear. Grateful thanks too to Richard Bannan – yet another member of the back row from the choir of St George’s, Windsor to come and sing with us – for stepping in at short notice to sing the aria Steve Kennedy normally performs. We are lucky indeed with the extraordinary quality of solo singing ability of those in our ranks. Windsor Castle must surely realise they have the core of most of the best professional choirs in the UK singing for them every day at Evensong. Lucky them, and lucky for us that James Vivian (the Choir Master there) and the Dean and Canons allow these guys to step away from the castle and share their glorious vocal gifts! 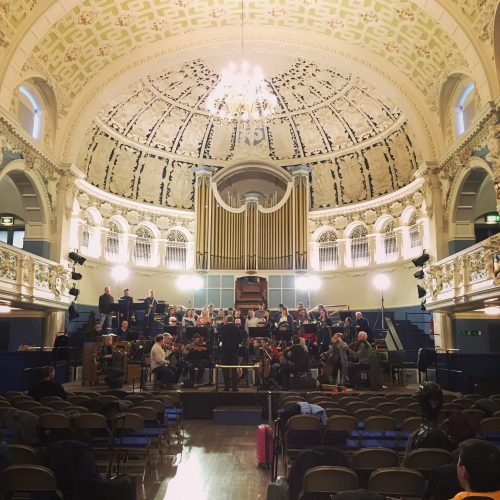 The very next morning we had a rehearsal of Path of Miracles for a performance the following afternoon in Nantes at La Folle Journée Festival. It was unusual to be in such a vast bustling place, essentially a Conference Centre, with so many concerts going on at the same time and members of the public ambling from hall to hall to sample whatever musical delights were going on. Again, a small venue for us and what could have been a tricky acoustic was made good use of by the singers as they drew in the audience. It was hot and a little stifling in the hall but you could have heard a pin drop, so we were very grateful to the audience for being so still and attentive and for coming on this most extraordinary of musical journeys with us. A raucous standing ovation at the end was most welcome. As we walked off stage and realised how deeply affected the audience had been, one singer said quietly “This piece: it never fails”. Quite right. Can’t wait for all the performances of it coming up this year all over Europe and the US. Do try to come and hear it if you can. I really don’t think you’ll be disappointed. 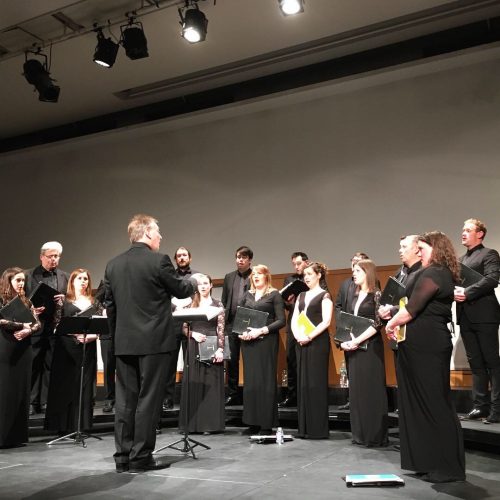 Next we focus on our Holy Week Festival and look forward to welcoming some huge names in the choral world to come and join us in creating what always proves to be a very special atmosphere at St John’s Smith Square. This year we have a particular focus on the intensely beautiful and spiritually uplifting music of Sir James MacMillan. There will be workshops, concerts and of course the most atmospheric of late night liturgical events in the Christian Calendar, the Tenebrae Offices, starting at 10.15pm each night of the Triduum Sacrum, celebrated by candlelight into total darkness. I personally am looking forward to reliving one the musical highlights of my career with Tenebrae when we give a performance of MacMillan’s incomparable setting of Seven Last Words from the Cross with the Britten Sinfonia on the evening of Good Friday. See you there.