Time for another update and I’m delighted and relieved to say we actually have plenty of recent activity to share with you!

The main event for Tenebrae during these first months of autumn was the filming of ‘Tenebrae Unlocked’, a series of 4 short filmed concerts made possible thanks to the generosity of so many of our supporters from all over the world. A successful crowdfunding campaign meant we could assemble our singers for 3 full days! It was a joy to be reunited with Andrew Mellor, who was the sound engineer for some of our most successful recordings to date (including our award-winning CD of Brahms and Bruckner), and film director Jonathan Coates. Jonathan directed the filming of a few pieces we recorded at St Bartholomew-the-Great a few years ago which are all available to view on YouTube, including Allegri’s Miserere. This last piece has done rather well and received quite a few views – something in the region of 10 million! We are hoping for similar success with these new films.

We chose 4 different areas of repertoire to reflect just some of the range we sing regularly in concerts. Beginning with some Renaissance gems by Tallis, Byrd, Lassus and Victoria, this series of films will hopefully give people a chance to see and hear Tenebrae in what we hope will be as close to a ‘live’ experience as possible. The second and third films focus on Romantic repertoire by Brahms, Bruckner and Reger, and some of the stunning pieces composed for the Russian Orthodox church by Rachmaninov, Chesnokov, Kalinnikov and the little known Nikolai Kedrov. The final film features music from contemporary composers Philip Moore and Judith Bingham. Moore’s Three Prayers we’ve performed several times over the years, and I think deserve to be far better known. Wonderfully crafted with beautiful harmonic language, these are masterful settings of Dietrich Bonhoefer’s Prayers in Times of Distress. They are rather apt for these worrying times we live in, and to make the mood even more gloomy we sang Judith Bingham’s stunning piece The Drowned Lovers, featuring the sensational mezzo-soprano Martha McLorinan as soloist. It’s an extraordinary work that’s full of intensity and submerges into a murky world of dark harmonies mirroring the text, only to finally emerge into the clear bright simplicity of Stanford’s classic part song The Blue Bird. As always it was a privilege to hear these fabulous singers performing such beautiful music and, owing to the ongoing challenges of singing 2 metres apart, the focus and listening required was even more intense than usual. The atmosphere was extraordinary, and I hope you will all have a chance to see and hear these films very soon, and feel you can share in our music-making once again.

In other news, in early October we journeyed off to Suffolk to sing in the glorious venue of Snape Maltings. The programme, based on our Grammy-nominated CD ‘Music of the Spheres‘, is always fun to put together and this time was no exception. So that we could perform to as many people as possible, we sang the programme twice – once at 3pm and again at 7pm. Huge thanks to everyone at Snape, especially Roger Wright, for their support and determination in making these events possible. Despite the appalling weather I still made it over to Aldeburgh to grab some fish and chips from the Golden Galleon in between the two concerts. Last time we were there it was lovely and sunny, and we all sat on the beach together merrily munching our way through cod and chips – but ah, that’s a thing of the past…. Hopefully not for much longer now. News of a vaccine must fill the hearts of all performers with hope that life can return to some semblance of normality sooner rather than later. 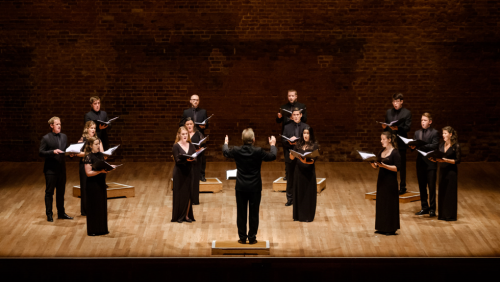 A week later, we were off on a whistle-stop tour to Eisenach, Germany, where we sang in the church in which Bach was baptised! This concert was part of the Thüringer Bachwochen, and it was a real treat to sing Bach’s motets – as well as Allegri and MacMillan – in such an iconic venue. Again, we were hugely grateful to the festival for moving mountains in order to get us there. Now that we’re firmly in Lockdown 2, it seems barely believable that we were in Germany just one month ago. Our only other concert in this period took us down the east coast to the ‘garden of England’, Kent. The jewel in this county, famed for its rural beauty, has to be Canterbury Cathedral. We performed a new programme entitled ‘Sounds of the Solstice’ to what is now the capacity audience for the Cathedral, 200 people. The concert apparently sold out in just over 15 minutes, so it was with a feeling of regret that we only had the chance to sing each piece once in this truly inspirational place of worship. Again, massive congratulations must go to the Canterbury Festival and their Director Rosie Turner and her team for finding ways to keep the whole Festival going, and for their immense contribution on the day to ensure that everything could go ahead whilst keeping everyone safe and sound.

The day when we can perform normally again in a packed venue can’t come soon enough. In the meantime, I do hope that many of you will watch ‘Tenebrae Unlocked’ when it goes live in the next couple of weeks, and for those of you missing singing, then do please join our next workshop on 19 November. It will be a lovely chance to say hello again to everyone.

Take care all and stay safe.