In these worrying times it’s quite a challenge to write a blog and make it all breezy and positive. I’d love to tell everyone that we have a full schedule of concerts up our sleeve, but of course that isn’t the case – for reasons of which everyone is well aware.

However, we did manage to hold on to one concert in July, and that was in the stunning monastic church of San Jeronimo in Granada, where we performed our programme of beautiful Spanish Renaissance music. We were delighted and slightly stunned by the willingness of Granada Festival to keep the door open for us – pretty much right up until the day of the concert – in order to make a final decision as to whether or not we could proceed. Happily, we were not yet in the realm of UK government last-minute changes on which countries we were allowed to visit – any surprise quarantine announcement would have resulted in desperate attempts to race back to the UK to save what little work we had back here in our diaries. So off we went, armed with lots of sun cream to cope with the predicted temperatures of 38° or 39°c, face masks and no small amount of trepidation regarding what to expect once we reached Granada. Our brilliant Spanish agent, Jorge Jimenez, was his usual totally unflappable self and helped us to recce the venue and work out where singers needed to stand in order to be 2 metres apart and hopefully still be able to hear one another. Thankfully, by pure chance on this trip we had two couples amongst our team of 10 singers. This really made a huge difference to those who ended up having to stand out on the end of the lines, or else they were in danger of singing just outside the church! 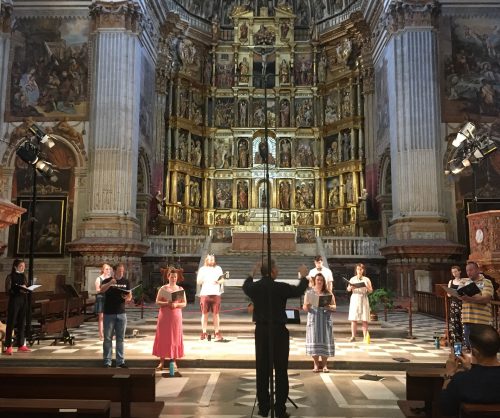 I confess to being a little emotional within about 30 seconds of hearing the choir start to sing. I have missed hearing such glorious music being beautifully sung by our gifted musicians. It was just a bit much to take in that this was the first time we could be together making music for nearly six months – and, more crucially, not knowing how long it might be before we could do so again. The sound of Lobo’s inspired motet Versa est in luctum – achingly beautiful and poignant even in normal times – gently wafting upwards from the singers into the vast open space above was some of the best possible medicine for our ailing art. A clip is available here. The seating in the church was meticulously marked for where people were allowed to sit and of course it was as full as it could have been. The atmosphere for the concert was intense and everyone present could feel it. At the end of the Victoria Requiem the venue was silent for a considerable time. It was a special moment, a pause for thought, to take in and realise the incredibly positive impact music can have on people and to realise why it is so important to treasure all forms of music – and dare I say, to treasure the performers. I hope someone in Westminster might read that last statement… 🙂

Looking forward to the autumn, we, like so many other groups, are staring at increasingly blank diaries. Our two concerts in Austria were recently cancelled because there is no longer a ‘travel corridor’ there, and our USA tour in November has also been cancelled, along with concerts in Scotland, Ireland, Sweden, Switzerland and of course throughout the UK. In the next couple of weeks, however, we look forward to several days of filming. Later this week we will record a short programme of music for the City of Derry International Choir Festival, and then we will embark on the creation of ‘Tenebrae Unlocked’: four short films which will be released to stream online at various stages over the coming months. As well as hearing some beautiful music performed by Tenebrae you will see the singers in action, and we hope that together with one or two behind-the-scenes interviews, these films will give people around the world a chance to share the experience of attending a Tenebrae concert. That we are able to bring this project to life is all thanks to an amazingly successful Crowdfunding campaign, and we are enormously grateful to everyone who has supported the creation of this series.

Last but not least, on 17 October we will be giving an actual live performance in Canterbury Cathedral! Huge thanks to the organisers of the wonderful Canterbury Festival for having the courage to keep the festival going and give us this chance to make music together again in this glorious Cathedral. It’s a programme based around the Winter and Summer Solstices and has something for everyone – and we were delighted to hear that it sold out within minutes of going on sale. Once that’s over it will be time for us to focus on Christmas. Perhaps it’s going to hit home harder than ever just what an important part of life music is for people, especially at that time of year.

Finally, warmest congratulations to the BBC Singers on their fab performance at the Royal Albert Hall at the Last night of the Proms. There, looking and sounding resplendent, as a shining beacon for all those who love choral music.