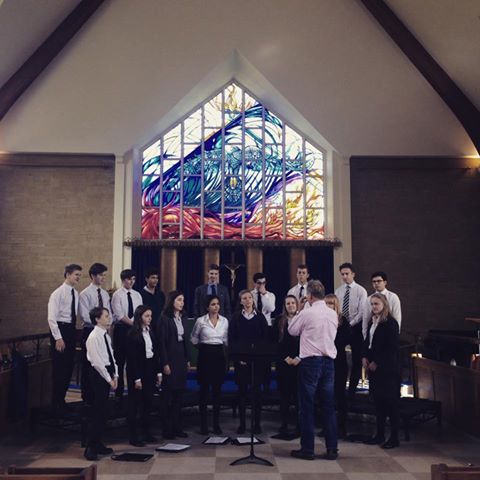 Gosh, another blog from me? Time passes so fast!

So, news from the Tenebrae Office just in: we have received funding from the PRS for Music Foundation, Arts Council England and the Santander Foundation in order to support our fifteenth-anniversary tour featuring Joby Talbot’s astonishing work, Path of Miracles! We are so lucky to have Henry Southern and Helen Daniels working for us in the office and the two of them are clearly performing wonders considering how much work they get through, but these official stamps of approval just go to show the incredibly high quality of the work they do too. Bravo guys, sensational stuff! We need more support though if we’re going to jump that final hurdle of performing the entire work from memory. Come on, surely there’s a choral-loving oligarch or billionaire out there who would love to make it happen..?!

It’s been an unusual month, due to unforseen circumstances our sessions with the BBC Symphony Orchestra had to be postponed which was such a shame as I was tremendously excited to stand in front of that amazing orchestra again having had such a blast back in July with the Bernstein Chichester Psalms. Hey ho, these things are sent to try us! We are currently rearranging the dates for the orchestra recording, but fortunately we were lucky enough to be able to record Schoenberg’s Friede auf Erden in one of our favourite venues, St Augustine’s Kilburn, on one day’s notice! We rehearsed the piece extensively with our fabulous German coach, Gerhard Gall, and then went into just one recording session to get the whole motet on disc. Needless to say, the singers were just wonderful. The piece is extremely difficult from a technical point of view, but they were flawless as always, focussing on performing the piece with every ounce of musicality and emotion we could muster. I look forward to the release!

We’ve just had a wonderful few days working with the students at St John’s School in Leatherhead. They have some inspirational and truly enlightened music staff working with the students there and I was delighted with all the groups I heard. When we sang together it was a thrill to realise I didn’t need to compromise my interpretation of any of the music one iota for the school choir, they were on it from the start. It was fabulous and I really hope to be able to work there again and hear them at some point in the future as they’re clearly on a fast upward track! Congratulations to Nick Smith and Simon Bland in the music department for all their hard work! 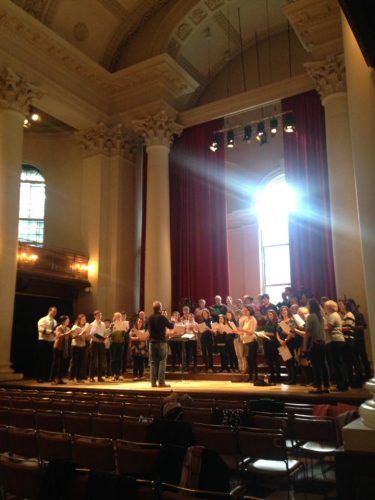 On Saturday 1st October I had another workshop with a group of 50 or so individual singers. Together with our Associate Artists, we had huge fun putting some music together by Parry, Vaughan Williams and Stanford. It was a fairly astonishing change from the initial run through of My soul, there is a country to the one we sang together with Tenebrae in our afternoon rehearsal. My lot were very impressed!

Saturday night’s concert was a delight for many reasons for me. Firstly, the concert launched our latest recording of British Part songs ‘Music of the Spheres’, a projected supported by Richard Baker, one of our Honorary Patrons and to whom I’m indebted for such knowledge of repertoire in this field. The pre-concert talk was hosted by none other than my boyhood hero James Bowman. As I explained to those who came along, James is the reason I became a counter tenor all those years ago (blame him!).  I was enchanted by his sound and always wanted to sound exactly like him. In this regard my vocal career was one of abject failure! We are also joined by the composer Bob Chilcott, my former colleague from The King’s Singers. Some of Bob’s music is featured on the disc and for me it’s always a delight to perform any of his works. In the concert we sang his setting of poems by Walt Whitman ‘ The Modern Man’ which include the basses huffing and puffing pretending to be joggers. With the amount of smoking some them indulge in sounding out of breath seemed all too easy! We also performed Bob’s beautiful piece ‘Marriage to my Lady Poverty’. This is one of those pieces that never fails to bring out the very best in Tenebrae singers. As a director I have to do very little because it’s written with such consummate skill every nuance just happens easily when the singers simply do what’s written on the page.

I’m off to the US tomorrow for a week of more masterclasses and workshops with the students at Westminster Choir College, Ryder University. I’m looking forward hugely to hearing and seeing these guys sing with their various directors and Principal Joe Miller. Tenebrae had the good fortune to stop over a few years ago and take part in a workshop and we were thrilled to hear the extraordinarily high standard of choral singing and direction going on there.

After the US I’ll be back in the UK for a couple of weeks and during that time I’ll have the honour and delight of working with The King’s Singers as their record producer. Doing anything in front of that lot is nerve wracking and I had a sneak preview a week or so ago of just what fabulous form they’re in, all the more astonishing as their new countertenor was only 2 concerts into his tenure! If that initial run through is anything to go by then these recordings are going to be the best KS ones ever!

Once that’s done we’re back over the pond for a week of masterclasses and workshops with Jeff Martin and the Brigham Young University choirs and orchestras, working on Handel’s timeless masterpiece Messiah. It will provide a chance for some of the Tenebrae singers to show their quality as soloists in their own right and I’m very much looking forward to hearing Katie Trethewey, Martha Mclorinan, Ellie Minney, Nick Madden, Steve Kennedy and Jimmy Holliday sing their arias. I have no doubt the quality of the playing and singing from the BYU students is going to be of an exceptionally high standard and I can’t wait to hear them launch themselves at one of the world’s favourite choral delights.