Well it’s back to earth with a bump after several weeks away with the family and Tenebrae’s mascot, Monty, I’m now back to editing recordings, programming, and of course spending lots of time with Henry and Helen in the Office! Well, I’m supposed to be….

Actually I had to sneak away from my family holiday to do a couple of concerts, the first in the beautiful town of Dinard, in Brittany. It was a delightful few days, we had a fun-filled workshop with a local choir followed by one of the best Tenebrae rehearsals I can ever remember. The church was a wonderful building with an acoustic to match, about 5 seconds echo I reckon. The rehearsal was so successful that we finished early enough for myself, Tom Robson and Jeremy Budd to go for a swim in the sea, directly behind where we were staying. The concert started late as the church was packed and they had to turn a lot of (rather disgruntled!) people away. Once we got inside the church and started singing we realised the acoustic had changed somewhat because of the sheer size of the audience! It was very different from the afternoon rehearsal but as always the singers coped admirably with it and knew exactly what to do in order to make sure the audience still had the best possible Tenebrae concert experience! 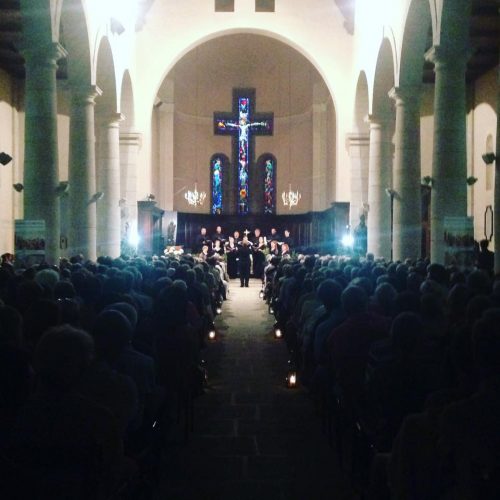 Tenebrae performing as part of the Dinard International Festival

Then we legged it up to Edinburgh – I flew from Exeter airport, which was such a pleasant change from Heathrow or Gatwick – and arrived to some glorious weather. Again,  the church was absolutely full and it seemed as if steam was coming off the audience! The heat was pretty unbearable for both us and the public and I, along with many of the Tenebrae gents, suffered for our art performing in our DJs… The concert was broadcast live by BBC Radio 3 and it was just fantastic to be in that wonderful city taking part again in one of the world’s most prestigious arts festivals. The Tenebrae Consort stayed on for two extra days to take part in an outstanding performance of Berlioz Romeo et Juliette with the Scottish Chamber Orchestra and Robin Ticciati at the helm, it was a fantastic performance, tutti bravi! 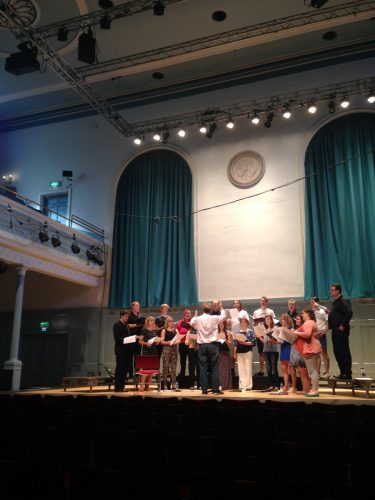 In about two weeks time we will be finishing off our Psalms and Devotions CD with the BBC Symphony Orchestra. This time it will be Stravinsky Symphony of Psalms, Psalm 23 by Alexander Zemlinsky and Arnold Schoenberg’s paean to Peace Friede auf erden. It’s going to be a fairly extraordinary few days as this is mostly repertoire we wouldn’t normally do because it’s on such an epic scale, but we are incredibly excited about it. Working with the orchestra and their leader, Stephen Bryant, again, is something we are looking forward to hugely. The choral writing in every work is stunning and the variety means the disc will contain everything one could want as a listener of the finest choral compositions in existence.

Further ahead, although seeing beyond these days with the BBCSO is very difficult at the moment, we’re looking forward to a very busy and exciting autumn and winter season, finishing with a concert of Christmas music at St John’s Smith Square. Do please check out our website to see what we’re up to and come along to see/hear/support us if you can. Come and say hello after the concerts too, we’re always happy to meet friends of Tenebrae, new and old!