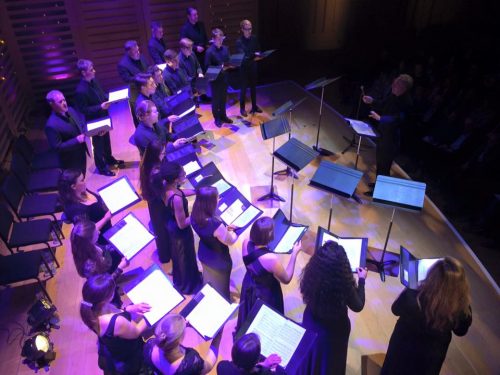 A great start to 2016 appearing at the fab London A Cappella Festival at Kings Place curated by The Swingle Singers. They’re clearly doing great things there in developing a huge and varied interest in singing of all manner of vocal ensembles. We were honoured to be opening the festival and it was a hugely enjoyable evening for us giving what was only the second performance of this programme of works by Bob Chilcott, my former colleague from The King’s Singers. Indeed it was a bit of shock to see three members of the current KS line up and great fun to catch up with them afterwards for a natter and a beer. I haven’t sung properly since I left The King’s Singers in 2000 and it gave me renewed admiration for what the singers in Tenebrae have to go through on a regular basis. I was totally exhausted afterwards – it’s a young persons game for sure! My lovely wife, Gracie, Jo Forbes, Nick Madden, Stephen Kennedy (of My Love is like a Red, Red Rose fame!) and bass Nick Garrett were all on terrific form and sang beautifully and helped me through it. I’ll be prepared for next time…! It was the launch of our latest CD release – Sun, Moon, Sea and Stars – which is mostly light music stretching back over Bob’s career, starting with arrangements from when he was a choral scholar at King’s College, Cambridge. It’s wonderful to see how his work has developed and we had the privilege to sing some of his more recent compositions. Of course Bob’s work is on an all together grander scale these days, writing for huge choirs and orchestras so it was a hotter back to the good old days even fro him hearing all the 6-part works sung by his old close harmony group ‘The Light Blues’ and then of course The King’s Singers.

Performing on In Tune, BBC Radio 3

We were lucky enough to be joined for some of the compositions by our choral development partners the London Youth Chamber Choir and their fabulous director Rachel Staunton. I spent an hour working through the music with these guys earlier in the week and they were so well prepared. Rachel is clearly doing some stunning work with them, challenging them but inspiring too. Very heartening to see just how many children and youngsters are involved and also how keen they all are. Congratulations to all of them as they sang so well, and in particular their soprano soloist who has a beautiful voice and was totally nerveless. Very impressive!

We’re winding up to the closing date for voting on the BBC Music Magazine Awards. We’ve been working hard trying to spread the word and even managed to get our new family pet involved – look for the video with Monty! Any extra votes would be much appreciated but I realise we’re up against some tough competition.

Veyr much looking forward to our concert at the Cadogan Hall on Feb 11th for which we sing a wonderful and slightly challenging programme of French music, including the extraordinary work by Francis Poulenc Figure Humaine. It’s revered and feared by singers for its difficulty but it is such a colourful and dramatic work that any chance to hear it should be seized with both hands. Also worth mentioning that our recording of this  few years ago was also shortlisted for the BBC Music Magazine Award in 2011. Lastly, listen out for the amazing top E which one of our lucky sopranos gets to sing at the end of it! There are other delights too of course from the medieval composer Pérotin, Brumel, Duruflé and Messiaen. Please do come and join us if you can!