Welcome to the first blog of Tenebrae’s current tour of the USA. This tour’s a mammoth one as we undertake 10 concerts in 10 different states in 13 days, and you’ll get to read all about it thanks to these blogs, written by members of the choir, carefully handpicked by management. I like to think I was picked for my natural wit and intelligent use of a pen (or thumb in this case) but no, apparently it’s because I’m more acclimatised, having been moonlighting in New York with a different group for the 4 days prior to this trip. So, in this case, not that carefully picked then!!

Touring in the US has never been a simple task for UK groups, and often leaves a deficit in the budget. Striking the balance between the books, feasible travelling and the musicians‘ sanity is a tricky task. Christie and Alex, on tour with us this time, and Esther (staying in London and probably revelling in the fact we’re all on a different continent) have put together a very doable yet challenging schedule, which started with the groups’ flight from London to Atlanta, via Washington. With only 1 hour 20 minutes to disembark from their transatlantic flight, get through immigration, collect their luggage, reload their luggage, get through security and catch the connecting flight, it was always going to be tight. So when the first flight landed 20 minutes late, at the furthest gate possible (apparently it was a 1.3km sprint from the gate to immigration – Adrian’s literally never moved so fast!) it looked quite likely that the connecting flight was not going to be caught. However, even with James scrambling across Washington Dulles with only one shoe on, the group made the connecting flight (I think they held up the flight, probably due to Tenebrae providing 1/3 of their passenger list) and everyone made it to Atlanta at pretty much the same time, with Lissie and myself flying from New York, and Andrew from Toronto. I have to say that everyone seemed in very good spirits despite the stress, and this upbeat mood carried us all the way to Athens in Georgia where most of the group went out and stocked up on beer and steak (kudos to Fiona for eating half a cow). 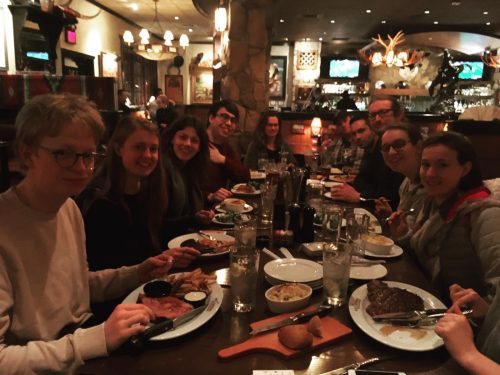 I think most people slept well and we were ready for concert number 1. Whether by luck or design, the first concert was a 3pm start, and so felt like a normal time to do a concert for those suffering jet-lag. However this did mean an 11am start time for the rehearsal and the Liverpool v Man City game kicked off at 11:30am local time. It was difficult to fully concentrate but Owain and I managed to pull it off whilst also enjoying and celebrating a famous victory (we found the match on TV in the green room – God bless America). I would tell you more about the match on this blog but I can already feel the glare coming from management!!

The venue for concert number 1 was The Hugh Hodgson Concert Hall in the University of Georgia, a spacious concert hall, and a joy to sing in. We were joined by The Hodgson Singers to perform the half Welsh, half Korean, Owain Park’s Footsteps! (He’s not really Korean)! They sang beautifully and with such warmth, it was a pleasure to sing this piece with them. And after this hors d’oeuvre came the main event, Joby Talbot’s Path of Miracles. I’m not sure I’ve ever written anything in the public domain about this piece of music, but those who know me well know what I think of it. For me it’s a 21st century choral masterpiece, and a must ‘come and see it performed’ for every choral geek out there (and even those that aren’t). 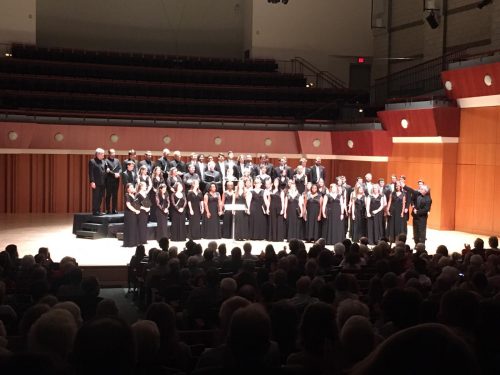 I have been privileged to perform this amazing piece with this wonderfully talented group of musicians on dozens of occasions and I’m always staggered by the effect it has on both the performers and the audience. Today was no different. One of the other things that always staggers me is that even when our backs are up against it, for whatever reason, the singers of Tenebrae always give their all and utmost commitment to Nigel and to the music, arguably more so in testing circumstances. Today was no different, with mobile phones and hearing aids punctuating various silences in the piece, the majority of the group jet-lagged having landed in Atlanta 20 hours earlier and all the stress of nearly missing their connection, people singing new lines, or even new vocal parts (Gabriel Crouch, former baritone now tenor) yet it was still an enthralling, committed and polished performance.

Concert number 1, standing ovation number 1. It says in Leon, the third movement of the piece, “That we are here is a miracle”. Without being too melodramatic, it kind of was today! Can’t wait for the rest of this adventure and performing this piece to thousands more people over the next two weeks. Come and catch us if you can, all details can be found here.

Ps. after the concert Martha, Hannah, Katie and I went to Taqueria Tsunami for Asian Mexican Fusion. On asking if the Korean Fried Cauliflower starter was vegan, the waiter, as dead-pan as possible replied, it’s Cauliflower! Maybe it was the jet-lag but it tickled us!