By the time we arrived in Maryland, we’d clocked up eighteen hours of coach travel. This has been a really civilised way to start the tour. It’s nice not to be rushing around airports, and to be able to look out of the window and see a bit of the country as we travel. The fall colours have been amazing! There’s also the added bonus of being held captive without any of the distractions of home: I’ve got so many boring admin jobs done (tax return/website updates etc) that I’ve been putting off for months! Others have used this time to catch up on sleep as we adjust to the new time zone. 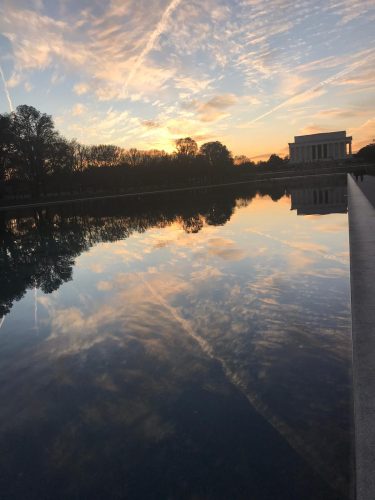 On the six hour journey to Maryland, Adrian entertained us all with a quiz. We all submitted five questions, then paired up to form teams of two. An odd number of participants meant that I teamed up with both Jeremy and Katie, which really ought to have given us an advantage over everyone else. Sadly, we only managed fourth place, and even inexplicably managed to get the answer to one of my own question submissions wrong (I blame jet lag…)! Fiona taught us that the national animal of Scotland is the unicorn, we learned that Hannah is a secret Ariana Grande fan, and that Benna’s specialist subject is hedgehogs!

On arrival at St. Andrew’s Episcopal church, we got stuck into rehearsing ‘England’s Finest’. I was relieved that there wasn’t a piece of cutlery in sight (having been presented with a spoon instead of a beater at Duke, and having previously played the crotales with a steak knife!), and I only had to worry about singing! This is an emotionally challenging programme. I absolutely adore Parry’s Songs of Farewell, and I love the way that Nigel paces them. By the time we reach the text “O spare me a little”, I always find it almost impossible not to choke up. This is problematic, because once you’re choked up, it’s almost impossible to sing! It’s definitely a balancing act. Howells Requiem is a fantastic way to finish the programme, and I love having the chance to hear my colleagues do what they do best in their step out solos. 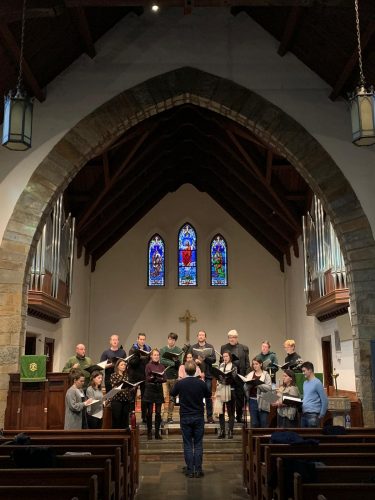 After the concert, it was a nice surprise to bump into an audience member that I’d worked with when he was at York University (it sometimes seems like a very small world!), then we headed back to the hotel bar to relax. There was American Football showing, and Mahon taught me about Hail Marys.

It felt like a real luxury to have two nights in the same place, and to have a lie-in the next day. I had an incredibly lazy morning, then got the metro into town in the afternoon and saw some of the sights of Washington DC, ate at an amazing Ethiopian restaurant, and didn’t sing a single note all day!

We’re now on our way to Chicago. I think they were struggling with our accents at the airport; Jimmy’s breakfast order arrived for ‘Jamy’, and mine arrived for ‘Malvin’, which isn’t even close! These new names might stick…!