The day started with an 08.30 departure for our drive to Salt Lake City for our flight to LA. The weather was pretty rough as we departed and there were a fair few bumps on the flight both on the way up and the way down. Not my favourite thing… We arrived into LA to more rain, allegedly the first day it had rained in 3 months. Typical!
We were met by Karmel transport, who:
a) turned up late even though Alex had rung them twice by then and
b) provided the grumpiest driver ever. When asked if we could stop for some food en route just the reply ‘No’ was given with no explanation as to why. Then he proceeded to shout that no food or drink was to be consumed on the bus. Frankly I’m amazed we were even allowed to sit on the seats…
Despite this rocky start we were all in pretty good spirits and made the journey to our hotel without further hiccup.
On arrival a few of us walked to a fantastic BBQ Smokehouse for lunch which consisted of a 3 Meat menu. Yum. Not so good for the more vegetable orientated members of our group.
After lunch we headed to Christ Cathedral, the venue for our concert that evening. What a place!! Having, I’m told, cost $65 million to buy the building and then had a further $35 million spent on it you would hope it would be something special and we definitely were not disappointed. 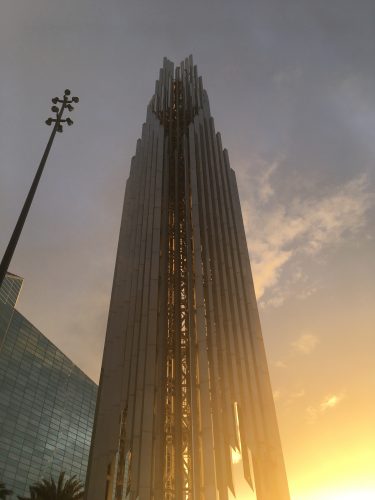 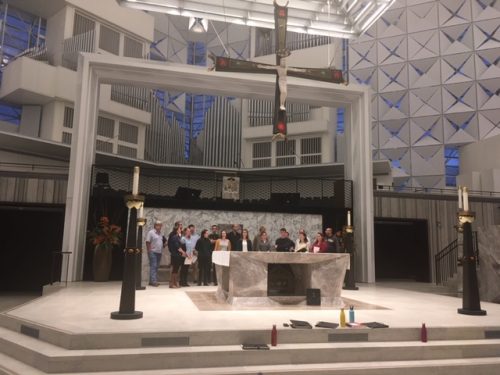 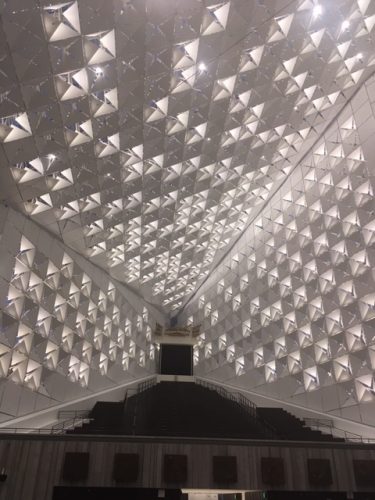 For the concert we were joined by the Los Angeles Children’s Choir to sing Owain’s piece, Footsteps. I thought they did an amazing job and sang really well with great control. It was a real pleasure to sing with them, and I think our audience of about 500-600 people were blown away by the simply amazing Path of Miracles by Joby Talbot.
Post concert there might have been a small libation taken at the Hilton Double Tree hotel to relax our tired voices and minds after another fab concert. Tomorrow we are heading off to Ashland for our last 2 days on tour. Let’s hope the weather is a bit kinder to us there…
If you’ve made it this far in my blog without falling asleep then thanks. If not, sleep well and I hope tomorrow’s is more interesting…
Goodnight all.
-Jeremy Budd (Tenor)
—
One final note. I have been asked by Andrew to post a small reply to Tom’s post of yesterday:
“After his rather pitiable attempt to lift every weight in the hotel gym in front of the wiser and more experienced Andrew–who didn’t feel the same need to prove himself–hotshot young countertenor Tom found himself unable to make their gym session this morning due to the extreme aching throughout his still growing body.
Such is the folly of youth. Poor thing.”