Congratulations to Victoria Meteyard, Hannah King and Joseph Edwards who will be joining Benedict Flinn as Tenebrae Associate Artists from September 2019. 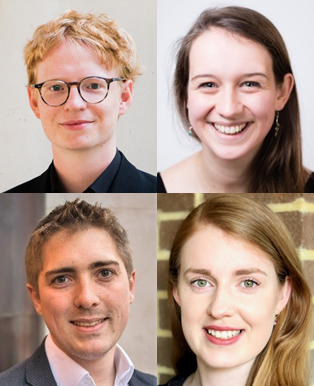 In addition to performing with the choir in concerts across the UK and worldwide they will be leading education workshops as part of Tenebrae’s Choral Development Programme.

Victoria Meteyard began singing as a chorister at St Mary’s Collegiate Church, Warwick. She went on to study a degree in Mathematics and Music at Royal Holloway, University of London as a choral scholar, during which time she recorded three CDs and performed in some of the UK’s most prestigious venues, including The Royal Albert Hall, Buckingham Palace and St Paul’s Cathedral.  Since graduating in 2016, Victoria has enjoyed singing professionally with a variety of choirs and ensembles such as the Eric Whitacre Singers, the Erebus Ensemble, St Martin’s Voices, The King’s Consort, ORA and as a member of the Choir of the Chapels Royal, HM Tower of London. She is an Apprentice of the Monteverdi Choir for the 2018/19 season and an alumnus of Genesis Sixteen.

Originally from Lancashire, Hannah King was a pupil at Chetham’s School of Music before going on to read music at Trinity College, Cambridge, where she held both choral and instrumental scholarships. Hannah now performs with some of the country’s leading choirs, including ORA and the Gabrieli Consort, and is a member of the chapel choir at the Tower of London. She also works with young people across the UK, leading singing and songwriting workshops for Westminster Cathedral, the National Youth Choirs of Great Britain and the Rosehill Theatre, and is an Assistant Leader for London Youth Choir and Assistant Conductor of Highbury Youth Choir.

Joseph Edwards began singing as a chorister at St George’s Chapel, Windsor Castle. He furthered his love of choral singing as a scholar at King’s College London, and graduated with distinction from the Vocal Studies Masters course at the Royal Academy of Music, where he was awarded the highest graduate diploma (DipRAM) for his final recital. In 2016 he made his début at Wigmore Hall in a recital for patients suffering with dementia, their friends, family, and carers as part of an outreach project through the Royal Academy of Music. Joseph has studied with Alex Ashworth since 2015.

Congratulations to Victoria, Hannah and Joseph – we look forward to working with you!