It seems pretty surreal that these last few weeks have been as busy as any we’ve experienced over the last 20 years for Tenebrae. What with all the difficulties of international travel, it makes our list of venues all the more remarkable and thus the first thing I have to say in this particular Blog is a massive thank you to our management team and international agents. They have been determined from the outset in these Covid times not to let opportunities slip through our fingers and have worked tirelessly to ensure that concerts can go ahead, regardless of what seem at times like insurmountable hurdles that have suddenly cropped up. Enormous thanks go to all the Festivals involved too for holding strong and going to such lengths to keep the fires burning for live music events. It is easy to understand why many might have felt the challenges are too great but some have embraced the situation and contributed massively to much needed concerts to enable audiences to experience that thrill of being there ‘in the flesh’ to hear glorious music performed especially for them. 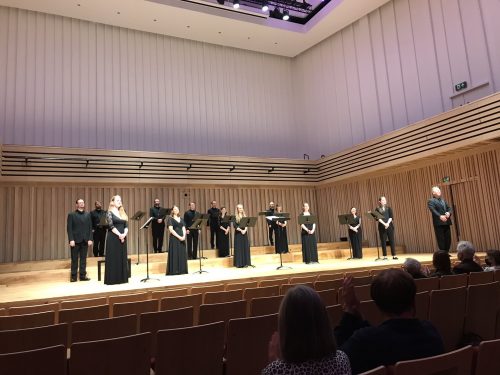 Driving up north is a lovely way to relax on the day of a concert but our next few concerts presented a rather different experience. The various requirements for any international travel these days are complicated and expensive, not to mention a myriad of rules and regulations that are changing so regularly, make taking on foreign concert engagements particularly tough and arduous for the administrative teams involved. Numerous Covid PCR tests that must be registered within specific time frames, passenger locator forms (some rather more complicated than others – well done the UK!) and vaccination passports required in paper and digital form all have to be thought of, but every time it got to a few days before a concert we would receive an email from Alex and the team laying out clearly everything that needed to be done. It made it all so much easier for us so once we finally arrived in our destinations we were able to focus totally on the music. This is what the best administrative teams do in the world of classical music and the arts more generally. We sang in a beautiful wooden church in Gstaad (Kirche Saanen) with what was a tough programme and all one soprano down owing to a last minute administrative crisis. The team did brilliantly and they reminded me of just how achingly beautiful the Requiem setting by Herbert Howells is. 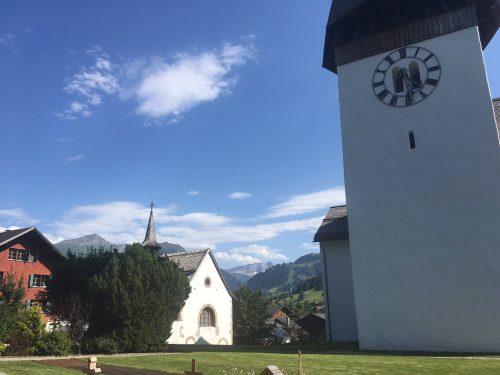 From here we flew to Germany and made for the stunning Kloster Eberbach. This concert and the one in Wiesbaden the next day were as artist-in-residence at the Rheingau Festival 2021 (we also go back there in December). In Kloster Eberbach we performed one of the choir’s all time favourite pieces of music, Joby Talbot’s fabulous Path of Miracles twice to a venue that was filled to 50% capacity on both occasions, totalling 1600 people. Standing ovations are something every performer enjoys but these were particularly poignant after so long without regular concerts and we were all struck by how visibly moved audience members were once the lights went up at the end of the concert. In Wiesbaden it was a pleasure to be joined by the violinist Bomsori Kim for our programme of Bach, combining the infamous Partita No. 2 with chorale tunes. 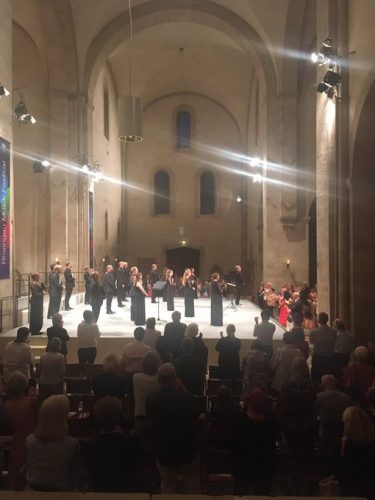 A standing ovation for ‘Path of Miracles’ at the Rheingau Festival, August ’21 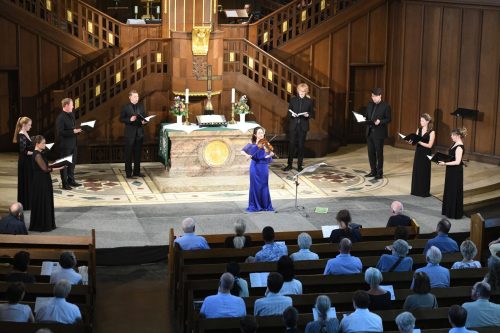 Next was France and a concert in the wonderful church of Rocamadour. What an extraordinary place this is set in stunning countryside near the Dordogne Valley, it’s a cliff-top village half built into the rocks and our concert took place in the Romanesque basilica, a wonderfully dark and atmospheric venue where the audience were absolutely packed in, and as close as they were allowed to be given social distancing. Singers were so close to the audience they must have almost felt as if they were in the choir themselves! A particular highlight of this trip was meting up with my old friend from the King’s Singers, Simon Carrington and his wife, Hilly. We were enjoying catching so much up in a restaurant overlooking the valley with a spectacular view before the concert that Alex had to come and remind me we had a concert to do! My excuse was that we had the excitement of a huge buzzard that had escaped from a nearby bird sanctuary landing on a balcony only 20 feet away from us. I think Simon was fearful it had it’s eyes on his dinner…. 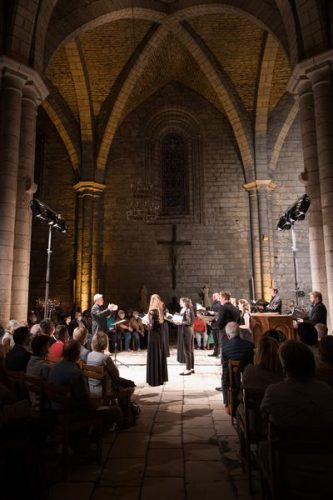 Finally in the month of August a few of our chaps and I went to Utrecht to sing in the Domkirche there. It’s really beautiful and absolutely vast, especially considering probably less than half of it is left. The gigantic tower at the west end still stands (although it is being restored at the moment so we couldn’t actually see it) but then there is a large square left where the nave originally stood. Mind boggling how something on such an epic scale could have been built so long ago. It must have been one of Europe’s very largest Cathedrals up to the point where it was part destroyed in a storm in the 18th century. We sang our Mediaeval Chant programme which includes Tallis’s matchless setting of the Lamentations. So intense, dramatic and at times serene that it never fails to move me when I hear our guys sing them. Not to be outdone, six of our ladies joined Max Richter and his wonderful team of musicians for an outdoor performance for around 8,000 people at the Crystal Palace Bowl of his work VOICES, a moving work inspired by and including Readings from the Universal Declaration of Human Rights of 1948. 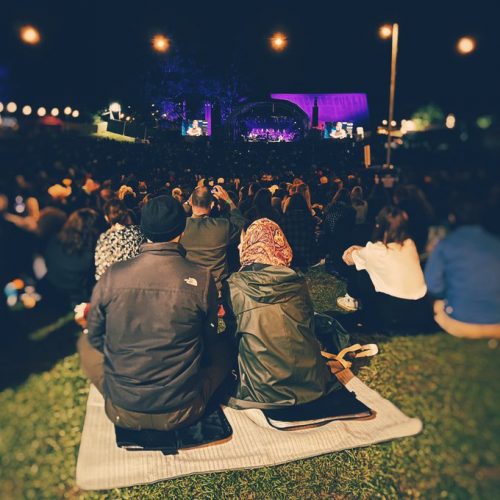 Thousands in the audience for VOICES at Crystal Palace Bowl, photo from Max Richter music

What’s next? Well, September is packed with concerts in Slovenia, Douai Abbey, St Georges’ Chapel, Windsor Castle, and the Lammermuir Festival where we will give the first outing of our 20th anniversary programme Humanity and Liberty. It’s an epic, involving two new commissions from Roddy Williams and Josephine Stephenson, the latter of these for which we are joined by actress Juliet Stevenson. As if all that wasn’t enough we also sing Philip Moore’s setting of Three Prayers, texts by Dietrich Bonhoffeur and Rudolphe Mauersberger’s beautifully poignant setting of Wie liegt die Stadt? Mauersberger was the Director of Music at Dresden Cathedral and this is a work he wrote in memory of 11 of his 18 choristers who were killed in the Allied forces’ bombing raid which destroyed their choir School and indeed almost the entire city. The final work is the ultimate musical tribute to the liberation of Paris, Francis Poulenc’s iconic cantata Figure Humaine which finishes with the work Liberté and sends one lucky (?) soprano soaring up to a top E! Not to be missed….the concert I mean, not the top E!

On a personal note away from Tenebrae, August saw me spending an awful lot of time working with singers from SIC – Choir of the Earth working on all 40 parts of Thomas Tallis’s motet Spem in alium. This is a wonderful organisation set up for anyone anywhere in the whole world who is missing singing in choirs, and also for people who perhaps for one reason or another have not hitherto been able to join a choir, providing people with opportunities to work with choral directs who teach and coach them specific pieces of music, aimed at eventually submitting recordings which are subsequently assembled to create a totally digital rendition. I think this digital rendition will involve something like over 1500 individual tracks! It’s an extraordinary thing and I’ve massively enjoyed spending hours in my music study (with my dog Monty to help keep people entertained) getting to know the work really well – in fact inside out now! Thanks to everyone who took part and the team who work behind the scenes at SIC, Mark Strachan, Ben England, Marc Siese and Conor Kearney.