A youthful Tenebrae consort made our way on December 2nd for our first of two weeks in France. The trip would involve five concerts in Marseille and Provence, and a final sixth concert in Aix-en-Provence with the full Tenebrae forces. Along the way we performed in some truly beautiful churches and ate some rather spectacular meals. The concert programme consisted of both secular and sacred works, with plenty of Chilcott arrangements of world folk songs and the Great American Songbook. The programme was something of a journey towards an English Christmas, finishing with both traditional and contemporary festive works.

Our first day began with a 6:40am check-in. After a long day of travel we arrived in Gemenos hoping for something hearty to set us up for our first concert. Franck, the production manager from the Département, took us to a local restaurant where we were overfaced by cassoulet and braised beef. A good start.

The concert was the first of many to be very well attended by an appreciative audience. More often than not, the audience decided to show their enthusiasm by clapping along to our encore Jingle Bells. This was a welcome test of our ensemble skills and we grew to expect it by the end of the week. Another revelation in Gemenos was just how dramatic the lighting would be for our concerts! We did not quite get used to this – probably for the best… 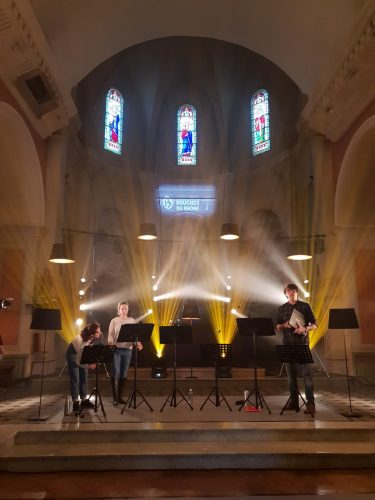 After the concert we checked into our Airbnbs and cooked a rather excessive meal. The location of the apartments was such that we really felt we were in the heart of Marseille, perhaps something to do with the dawn chorus of exploding tear canisters and flaming bins right beneath our window. We did, on the whole, manage to avoid being affected by the Gilets Jaunes protests. Our one mishap involved driving around for an hour desperately trying to find a petrol station with any petrol left…

Happier times included our two days off! The first was spent familiarising ourselves with the Vieux Port area and climbing up to Notre-Dame de la Garde for impressive views over the city. We stayed to watch the sunset before heading down for an unrivalled steak dinner. Our second day off involved more walking up hills, this time in Les Calanques national park. Some of us pointed out that a worrying theme was developing. These complaints were ignored. The surroundings were, admittedly, incredibly beautiful and Beth and Ben even managed a brief December swim. Below you can find evidence of this mighty feat. 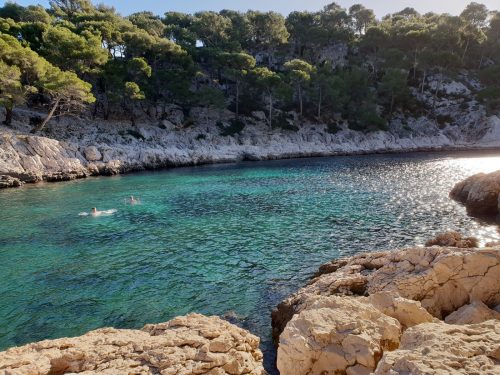 Beth, Ben and Owain must be thanked for their hard work behind the wheel of our enormous car. One especially taxing occasion springs to mind in which Ben’s eternal enemy – the one way system – got the better of him before our concert in Aix-en-Provence. After offering a few empty words of encouragement we left Ben to battle bollards for half an hour while we walked to the church to rehearse. St Jean de Malte was a particularly beautiful venue and an ideal space for some of the earlier pieces in our programme. We hope Ben will one day forgive us.

One of the great challenges of the week was to give spoken introductions in French during the concerts. Owain undoubtedly stole the show with his amiable advertisements for CDs to be purchased after the concerts. Owain’s presence during our close harmony numbers was equally appreciated by the audiences to the extent that he was sought out after one concert by a six year-old girl asking, ‘C’est qui Monsieur Dum-Dum?’ When our bass introduced himself to his newest fan she promptly burst into what we can only hope were tears of joy. Owain had opportunities for more sophisticated bass singing in pieces such as Francisco Guerrero’s Pastores Loquebantur and Joanna Marsh’s Evergreen. It was a real thrill to perform these pieces with one voice to each part in such resonant spaces.

At the end of the week we were joined at the impressive Grand Théâtre de Provence by the full choir. It capped off a fantastic first week in the south of France and left us wanting more!