I’ve assembled a Lenten Sequence for our performance on Holy Saturday, which includes settings of the Tenebrae Responsories for Holy Saturday, Passiontide motets appropriate for the Easter Triduum, and a selection of Eucharistic works that lead to Gerald Finzi’s masterpiece, Lo, the full, final Sacrifice.  I’m particularly pleased to be performing John Sanders’ The Reproaches, a wonderful and powerful setting of the Good Friday liturgy, and James MacMillan’s Miserere, a stunning recent addition to the repertoire.

James’ music has long been an important part of my work.  My first ever commercial recording was a Naxos disc devoted to his music in 2009 with my Dmitri Ensemble, celebrating his then 50th birthday with performances of the Seven Last Words from the Cross and other choral works.  The recording went on to win various awards, including Limelight Recording of the Year and a Gramophone Award nomination.  His music speaks to me in a very compelling way, at times both visceral and hard-hitting, at others serene and touching.

Tenebrae and Britten Sinfonia will be performing MacMillan’s Seven Last Words From the Cross on Good Friday, 19th April 2019

I’ve been immersed in choral music all my life, having started out as a treble chorister, later an undergraduate singer at University, and now as a composer and conductor of choirs, ensembles and orchestras.  I now share my passion for this music with my audiences throughout the world.

It is hard to imagine a more exquisite setting of the Ave verum text than William Byrd’s, and this would be my recommendation to discover something about our programme.  The first three chords  remain as one of the most striking harmonic progressions, especially for the time that it was written.  In our concert at SJSS we pair Byrd’s setting with Roderick Williams’s Re-imagined version, which takes apart Byrd’s original and creates a fascinating multi-layered sonic experience.  I think audiences will love it.

There are too many to choose from!  I’ve been very fortunate to have some wonderful experiences so far, and look forward to many more!  Some particular highlights have included my debut with the LPO, open-air performances of The Marriage of Figaro in Provence, singing Tippett Spirituals at the Baptismal site in the River Jordan, eleven performances of Beethoven 9 around Australia, some particularly memorable concerts at Washington’s Library of Congress and Notre Dame Cathedral, recording Messiaen in an magically quiet Ely Cathedral at 1am… 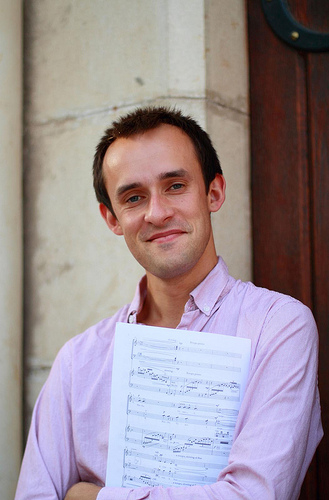 Bach or Handel?   Bach, but I never (ever) tire of Messiah

Alto or Countertenor?    A perfect blend of both!

The Choir of Clare College will be performing their programme A Lenten Sequence as part of the Holy Week Festival on Holy Saturday, 20 April 7:30pm at St John’s Smith Square.