Bethany Partridge, our soprano Associate Artist, takes over Nigel’s monthly blog for December and tells us about the choir’s recent tour to America! 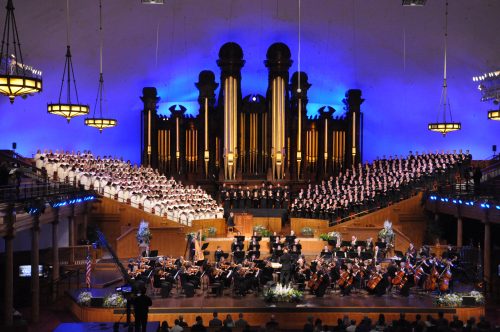 Two months have now passed since the official launch of Tenebrae’s Associate Artist scheme with a residency at St John’s School, Leatherhead and a English partsongs concert at St John’s Smith Square in London. Amongst other things, the role comprises singing with Tenebrae for all of their projects, home and abroad, and running educational singing workshops with the London Youth Choir and Islington Music Centre, a fantastically varied opportunity for a young freelance singer. We have worked with LYC’s Chamber Choir, Boys Choir and have their other choirs to look forward to in the new year. Earlier in November we recorded Owain Park‘s new commission, Footsteps. It was rather nostalgic for me to perform with the National Youth Choir Fellows, and I’m excited to hear the results of the collaboration!

It was with mixed feelings that we began our travels to Utah, USA, on the 9th November, as the results of the US election were falling into place around us. Nevertheless, the trip was a fantastic success and experience for all involved. We arrived at Salt Lake City late on Wednesday evening to a warm welcome from Jeff Martin, the mastermind coordinator behind the five days. From the airport we travelled onwards to Provo, home of Brigham Young University, a high altitude city 45 miles south of Salt Lake which sits under the impressive Wasatch mountain range.

The first day began early for some of our Tenebrae soloists (Katie Trethewey, Martha McLorinan, Ellie Minney, Nick Madden, Steve Kennedy and Jimmy Holliday) who had an optional 8am rehearsal with the BYU Baroque orchestra, led by Alex Crane. Nigel had already been in Provo for three days preparing the university choirs and orchestra for our joint performance of the Messiah. For the project two of the university’s finest choirs came together: the Chamber choir directed by Rosalind Hall and the BYU singers directed by Andrew Crane. The massed choir of over one hundred young singers would join Tenebrae to sing a selection of the chorus numbers, including ‘And the Glory’, ‘And with his stripes’, and ‘Hallelujah’. The singers of Tenebrae began their rehearsal with the BYU choirs and Rosalind Hall, before working with Nigel and the orchestra in the impressive De Jong Concert Hall, a 1200-person capacity venue on the university campus.

Of our three Messiah performances, two took place in the De Jong Concert Hall in Provo. For the the third we travelled to the Mormon Tabernacle in Salt Lake City and a sell-out audience of 3000. Friday and Saturday mornings saw Tenebrae in rehearsal for a live broadcast on Sunday. The rehearsal on Saturday, in the De Jong Concert Hall, was observed by a number of BYU singers and their directors. All three performances were a huge success and very well received by our audiences. We had been told that BYU have not performed the Messiah in over thirty years, which made the collaboration particularly special to all involved.

Sunday morning was the highlight of the trip for me. We were very privileged to sing with the Mormon Tabernacle Choir for their weekly broadcast of ‘Music and the Spoken Word‘. We arrived at the Tabernacle at 7.45am (fortunately our hotel was only a five minute walk away) for a run through of our solo items, Bob Chilcott’s ‘Marriage to our Lady Poverty’ and Kalinnikov’s ‘Gladsome Light’. We were briefed on how to perform to the cameras during the broadcast and how to hold our folders, amongst other things. At 8.35am there was a full run-through of the thirty-minute broadcast. It was now that we discovered the sheer scale of the show; the stage was filled by a full-size symphony orchestra made up entirely of volunteers, and the Tabernacle Choir, comprising 365 singers, filled the stalls on either side of the organ. The choir sang ‘Glory’ to music by Rimsky-Korsakoff,and Gaelic tune ‘Morning has Broken’ whose setting had been written by their music director, Mack Wilberg. The performance ended with a collaboration; Vaughan-Williams’ ‘O Clap your Hands’. Following the run-through we were given some last notes before the actual broadcast took place at 9.30am to a full audience. It was a new experience for many of us, and one that we will remember for long time, no doubt.

The Music and the Spoken Word brought our brief tour to a conclusion, and Tenebrae began the long journey back to the UK. During our stay we made some valuable friendships with the music department at Brigham Young University and the Mormon Tabernacle, and also had the opportunity to explore the stunning mountainous surroundings during our free time. Hopefully we will be able to return in the future, and we look forward to welcoming some of the BYU students to our concerts in the UK as part of their study-abroad programme next May.