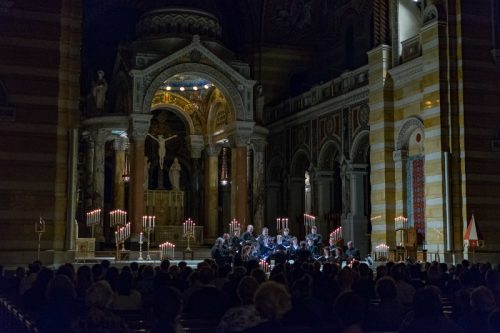 March took Tenebrae to the US for another tour of fabulous concert venues and ecclesiastical spaces. This time round we were performing Joby Talbot’s choral extravaganza Path of Miracles. Needless to say there were brilliant performances from everyone involved, but special mentions must go to the low boys team of Adrian Peacock and Jimmy Holliday, who got us off each night with a terrific rumble on a low A (a semitone lower than the famous low B flat of Rachmaninoff’s Vespers so it’s definitely not for any faint-hearted baritone!), and the young counter tenor Tom Lilburn, one of our Associate Artists who not only sang his dramatic solo at the start of the piece brilliantly but also supplied us with sublime medieval chant between movements. To date this has always been sung by counter tenor Mark Chambers, an incredibly fine and experienced singer on the operatic stage as well as in any vocal ensemble, who really created something very wonderful and dramatic in his interpretation of this role. So it was no mean feat for young Tom to step into such big shoes! Bravo Tom.

As I said,  fabulous singing from everyone in Tenebrae, but there were also marvelous contributions from all the participating choirs in our numerous workshops who joined us for Owain Park’s companion piece to Path of Miracles,  Footsteps. Of particular note and delight was a masterclass I gave in Princeton Chapel to Gabriel Crouch’s Glee Club choir. Tenebrae were alongside me – great to have Joby there too – and it was fascinating to have the two groups feed off each other in terms of energy and sound perspectives, demonstrating to each other all manner of choral techniques. It was great to hear just how quick the Glee Club were to pick up on the various (& numerous!) things I was asking for. This is a seriously well drilled and classy outfit and one that,  under the inspired direction of Gabriel, is making a big name for itself in the world of choral music. It all culminated in a resounding success for the final concert of our trip in the impressive chapel of Princeton University. For sad reasons back home the tour was a memorable one for me personally and I’d like to thank our wonderful manager Henry Southern, our US manager Christie Starrett, and all the singers of Tenebrae for being so kind and supportive. I can’t think of anything musically that could have been as uplifting as Joby’s masterpiece to help carry me through what was a tough few days.

Once back home we were almost straight into our Holy Week Festival at St John’s Smith Square. It was a real treat to have so many of the UK’s finest professional and amateur choral groups there. Highlights for me were hearing Gesualdo Six, directed by one of our own Associate Artists Owain Park, Jeff Skidmore and Ex Cathedra in a typically fascinating and revelatory bit of programming, a terrific UK debut concert given by Skylark Ensemble from USA and their artistic director Matthew Guard, and to cap it all off the awesome Gabrieli Consort & Players giving us a suitably inspirational rendition of Bach’s Mass in B Minor on Easter Day to celebrate the ultimate Resurrection! Roll on next year….

After a few short days of rest I was back in front of the Signum microphones conducting Aurora Orchestra and Dame Sarah Connolly. The performances from this astonishing orchestra and the matchless Dame were breathtaking. I’m always excited about our recording projects but this one, hot on the heels of our Symphonic Psalms and Prayers CD with the BBC Symphony Orchestra, is one that I really hope will be loved and treasured.  More on this very soon, but in the meantime I would like to thank all the supporters of our crowdfunding campaign who made this recording possible! We were overwhelmed by your generosity and can not wait to share this recording with you.

Towards the end of April we visited Millfield School and had the pleasure of performing in their stunning concert hall. It isn’t often I walk into a venue and hear utter silence, no rush of air from heating or air conditioning units, electrical buzzes from lights,  or general noise from just outside, but this was exceptional. A fantastic choir too with Matthew Cook at the helm: great basses and a terrific soprano sound. I look forward to hearing them again soon!

That’s it for now. Just looking ahead to May: Germany here we come, more B minor masses with the Academy of Ancient Music (Can’t wait!!), some masterclasses at Eton College in Windsor (the day before the Royal Wedding!) and a quick jaunt up to Scotland to sing in the glorious Kirk in Perth. No rest for the wicked they say…