I’m writing this blog as I sit in glorious Devon where I’m spending some much-needed quality family time.  Last term was busy not just for Tenebrae but for my children too! The usual endless taxiing about getting them to their various sports clubs – their favourite being cricket – alongside their own birthday parties and, of course, their music lessons! Joshy especially had a good term. Just before his 7th birthday he got his Orange belt in karate (with a first-rate pass no less!) and rather more importantly he was offered a place as a chorister at St John’s College, Cambridge! We spent a lovely day looking around the school and heard the current boys in a morning rehearsal. I have to say, I haven’t heard as fine a set of boys in decades. I knew they would be good but the quality of the sound, wonderful legato and amazing ensemble and intonation really blew me away.  It was a joy to observe Director of Music Andrew Nethsingha work with them;  such a calm but focused atmosphere with every boy alert and wanting to participate as much as they could.   Josh sat open-mouthed for the whole rehearsal and was in no doubt he wanted to be in there singing with them. 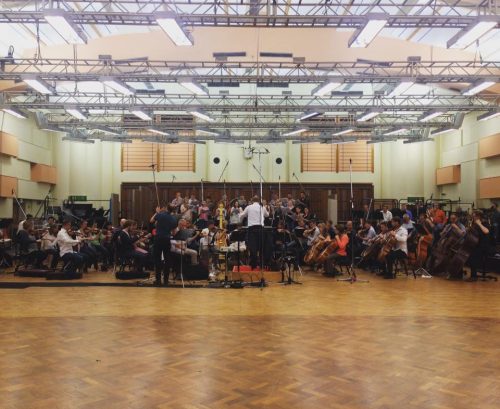 Oh yes, and Tenebrae! A long-awaited project has finally got under way: our Psalms recording, featuring Symphony of Psalms by Stravinsky, the Chichester Psalms of Bernstein, Zemlinsky’s setting of Psalm 23 and to round it all off Schoenberg’s prayer of peace Friede auf Erden. I first came up with this idea about 10 years ago and we have worked incredibly hard to find a way of making it possible. However, with help from numerous people; Claire and Steve Long yet again, Richard Baker, and former Tenebrae singer David Allsopp we have done it. We had a hugely exciting day working with the BBC Symphony Orchestra recording the Bernstein and it was a special moment to welcome back counter tenor David Allsopp to sing the alto solo. For many years David was one of our regular altos in Tenebrae and also became a close friend of myself and our co-founder Barbara Pollock. When Barbara died David was personally a huge support to me in keeping Tenebrae going and helped massively in the process of taking the choir’s official status from Switzerland to the UK, a process that was horribly complicated and took months and months! Anyway, it was fabulous to hear him sing the solo so beautifully and he deservedly received a huge round of applause from everyone present. The leader of the BBC Symphony Orchestra, Stephen Bryant, was absolutely sensational and together with all the section leaders made it an incredibly positive and wonderful day of world-class music-making. Our production team of Stephen Johns and Mike Hatch from Signum Records had a huge challenge in setting everything up in such a short space of time but, as usual, were totally unflappable and managed to get every thing we need for a great performance on disc. Roll on September when we make a start on the other music. If you don’t know the Zemlinsky then you’re in for a treat…

We’re just back from a quick trip to the Ryedale Festival where we performed our Brahms and Bruckner programme in Ampleforth Abbey. The long (very long!) acoustic was perfect for the Bruckner but perhaps a tad too generous for the intricate writing of Brahms’s Fest und Gedenkspruche which moves at quite a lick harmonically and in the enunciation of the text, but this didn’t stop us from relishing singing this glorious music… we were joined by the Abbey organist Will Dore, trombonists Simon Cowen, Paul Exton-McGuiness and Mark Frost as well as trumpeter Illiam Quame. All made terrific contributions to what was a hugely enjoyable concert. The trip, as is often the case being a travelling musician, was far too short. I personally would have loved to see more of the beautiful countryside, the weather actually put paid to that, and spend some time walking around and perhaps discover a pub or two with some great Yorkshire bitters. Next time maybe….

We are now looking forward to a trip to Dinard in France, somewhere new for me personally. Afterwards, I’m hugely excited about our trip up to the Edinburgh Festival. Brahms, Bruckner and a little Reger will be on the menu together with a beautiful sequence of early music that includes of Lobo, Allegri, Victoria and the fun double choir Missa Ego Flos Campi of Padilla. Then it will be back to holiday time again in Devon with the family until schools start in early September, by which time I suspect Grace and I will need a rest!