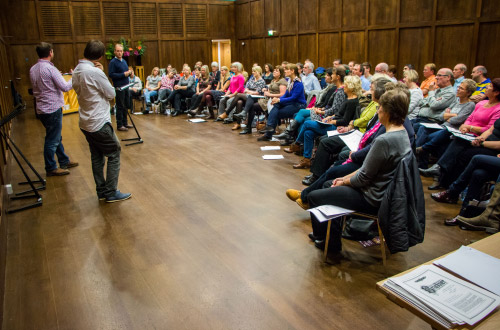 At St Martin-in-the Fields in November we did the first of our major The Tenebrae Effect workshop. Henry Southern our manager was delighted to tell me it had sold out within a week of being advertised and that we had to increase the capacity for the event in order to fit in everyone who wanted to be involved. A hugely enjoyable day for me working with incredibly enthusiastic and, to varying degrees, experienced choral singers who were quick to adapt to the ways we work with Tenebrae and the reasons behind why! I think the plan is to do 3 or 4 of these in London every year, but to extend to putting on smaller workshops on the morning of any concert day outside London. Can’t wait for the next one!

I knew the launch concert of our Brahms and Bruckner CD would be special, especially as the choir had just performed that programme in 8 concerts given around the U.S and so knew it backwards. It always take things to a different level when a choir can perform from memory and it was great to see so many of the singers enjoying the experience of singing all those great choral works without glancing down into their folders! We were joined by the excellent amateur group Epiphoni Consort who, as the lucky winners of our Locus Iste Choir Competition, got to sing with us in the concert. They were excellent and it was great to be able to go into a fair amount of detail in what was a very short space of time to put it together. I look forward to hearing them again!

We spent more time singing with other choirs at Cranmore School in Surrey and Godolphin and Latymer in Hammersmith. The former had just returned two days earlier as winners from a choral competition and despite being exhausted they sang beautifully. It was a very long day for some of those youngsters, the youngest being just 8 years of age. It was lovely watching the look on their faces as they stood and sang right next to the Tenebrae guys. When the tenors and basses really opened up in Rachmaninov’s ‘Bogoroditse devo’ they stopped singing altogether and just turned round open-mouthed at the sheer intensity and volume of what our guys do in every concert! The girls of Godolphin and Latymer were a delight and showed their extraordinary ability to stay focused at the end of what was also a very long day for them. We had a fairly intense hour-long rehearsal to get the up to speed but they were very quick learners and really gave it everything in the concert, impressively not forgetting anything we’d discussed and practised earlier on. No mean feat given the level of detail we went into. Both were fabulous schools with truly awesome facilities and fabulously talented and enthusiastic music teachers at the helm. Many thanks to all for the warm welcome we were given and enthusiastic receptions at the end of each concert.

I’ll finish this blog writing a little about our latest recording sessions held recently at All Hallows, Gospel Oak. Another recording project that has been inspired by our Patron Richard Baker is one which will centre around British secular part songs. Again, as with A Very English Christmas, Richard has brought to my attention some absolute gems that I had never come across, such as the wonderful lush settings of Two Shakespeare Songs by Herbert Murrill, a brilliant little piece by Jonathan Harvey ‘Song of June’ and some little known gems by Frank Bridge. The disc will also include Ralph Vaughan Willams’ Three Shakespeare Songs, Four part songs by Elgar and two by Stanford. One of the pieces by Stanford ‘The Bluebird’ is extremely well known and has been recorded many, many times. Here however, it is preceded with the staggeringly beautiful setting of a poem called ‘The Drowned Lovers’, written and composed by Judith Bingham. It really is an intensely beautiful work based on Stanford’s ‘The Bluebird’ and features our glorious mezzo soprano Martha McLorinan. Definitely a singer to watch out for! We finished with a great set of pieces by Bob Chilcott which are settings of poems by Walt Whitman: ‘The Modern Man I Sing’. These were great fun and involve some unusual heavy breathing from the basses in the first movement entitled ‘The Runner’! There’s some terrifically energetic music here with relentless driving syncopated rhythms. In the middle though is total calm and tranquility in a piece called ‘Invocation’. I suspect these pieces are going to become far more well known and widely performed very soon!

It will be available on our website before too long…