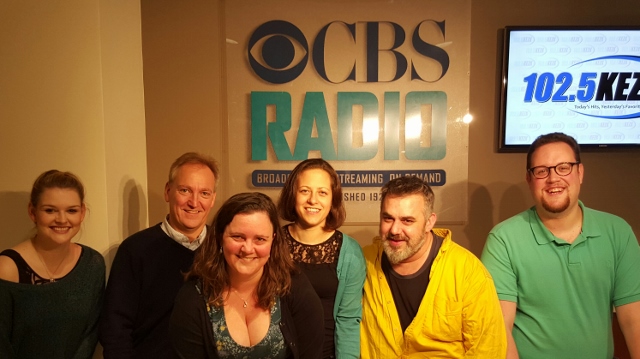 After a lively evening post-concert in Cincinnati enjoying a few rounds of pool and sampling Yuengling, the oldest lager brewed in the US, we were grateful for the luxurious departure time of 10AM to set off for St Louis. We broke the long journey with a quick stop over for lunch in Effingham Illinois (many of us spent almost all 30 minutes allocated trying to cross the freeway on foot!), and arrived in St Louis in glorious afternoon sunshine, passing the Gateway Arch (completed almost 50 years ago to the day on 28 October 1965) as we crossed the Mississippi river.

Nigel and a few of the group immediately rushed off to do an interview for the local radio, whilst the rest of us took advantage of an hour to ourselves to explore the beautiful downtown area of the city. With all the red-brick houses, autumn leaves and squirrels running around, it felt just like being back home in London!

Many members of the group had sung before at the incredible Cathedral Basilica of St Louis, in fact this was the fourth time Executive Director Scott Kennebeck had invited Tenebrae to sing in the St Louis Cathedral Concerts series since 2003. This was my first time in the venue however, and and walking into the building was quite literally a breath-taking experience. We’ve been treated to some incredible acoustics on this tour, but for me, this was the best so far.

The concert itself went without a hitch, and a personal highlight was the Allegri ‘Miserere’, which saw Ben Alden covering an impressive amount of ground roaming around the cathedral for the solo plainchant sections. The four of us in the solo quartet, hidden at the back certainly had a smile on our faces for our third verse after we’d spotted him practically sprinting through a section of the church hidden from the audience.

After the concert we were generously invited to the home of Tony Fathman, Treasurer of St Louis Cathedral Concerts, where we were treated to food, wine and even some entertainment from Tony at the piano. Those members of Tenebrae who had sung at the Skylark gala returned the compliment with a quick rendition of ‘When I’m Sixty-Four’ and ‘Goodnight’ before heading for home for the night. We were all sorry not to have more time to enjoy beautiful St Louis, and hope we’ll be back again soon!

Described as “one of the best choirs in world” read The STL Today review of Tenebrae’s concert in full here.