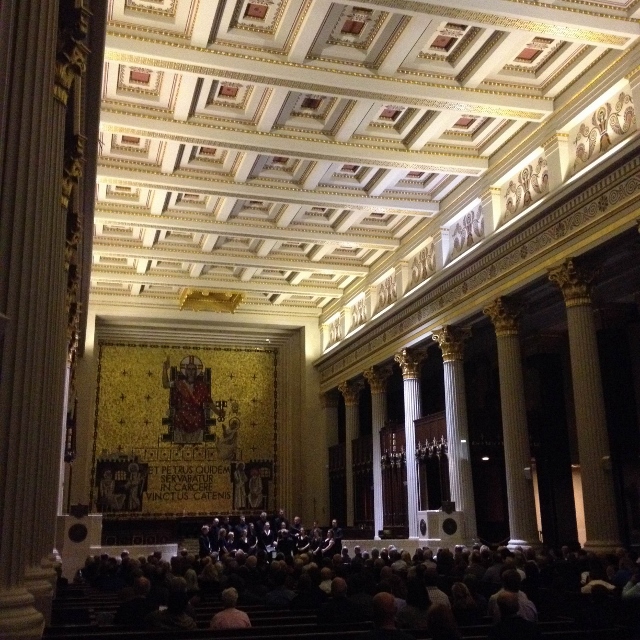 After a 6am wake-up call, it is usual for an early morning coach to have an air of sleepy silence, which is only ever broken by the sound of a certain someone’s phone, or indeed my volcanic snoring. It is perhaps surprising then, that despite the forecast of continued ‘English’ drizzle for the day ahead, the morning coach journey back from Birmingham, Alabama to Atlanta Airport was anything but a subdued doziness; there was a definite optimistic buzz of chatter and activity.

Today we were travelling to Cincinnati, where we were to be treated to “one of the world’s most amazing buildings to sing in” (Nigel Short). St Peter in Chains Cathedral conjured particular special memories for Tenebrae as the highlight of several previous tours, and was described by one of the singers (known as ‘Dad’) as “such a phat building to sing in”, which shows he clearly doesn’t deserve his nickname. As this was my first States trip with the group I was naturally excited to acquaint myself with what promised to be a spectacular venue.

It did not disappoint; on entering the west doors we were transported to a building that would not have been out of place in the Vatican. The highly decorative flat ceiling featured rows of golden squares which, along with the Romanesque pillars down either side of the nave, is not dissimilar to the beautiful Santa Maria Maggiore in Rome.

Before rehearsing we were treated to a wonderful lunch courtesy of the Cathedral, which consisted of the usual sandwiches, but more importantly and much to the delight of our English palates, a good variety of salads. It is easy when on tour to eat pretty badly as there is often little time between travelling, rehearsing, and performing, so this was much appreciated by all. This didn’t, however, stop us enjoying the homemade chocolate and salted caramel muffins alongside our fresh fruit salads.

As our sixth venue, we fortunately didn’t need to rehearse for too long, just long enough to adjust to the new acoustic and tighten up a few corners of the programme. Having performed in several pretty dry acoustics we wanted to take full advantage of the vast space and the c. 11 second echo but, due to the noisy air-conditioning unit, we would have to wait until the evening concert to fully experience the beauty of the sound world that this majestic building could create for us.

When we arrived ready for the concert we were pleased that the ‘air-con’ had been turned off, and we could finally enjoy the acoustic which was particularly suitable for the renaissance half of our programme. Singing in this building was like “sinking into a hot bath” (Richard Savage), and the music certainly seemed to resonate with the beauty of the architecture, no pun intended. Performing the German romantic repertoire in this space also seemed to bring new life to the music, where shifting harmonies merged in the vastness of the space. It was a joyous venue to sing in. This was the opening event in the cathedral’s concert series ‘Great Music in a Great Space’ and I couldn’t have thought of a better title for this concert; it was truly “super music” (Nick Madden) in a stunning venue.