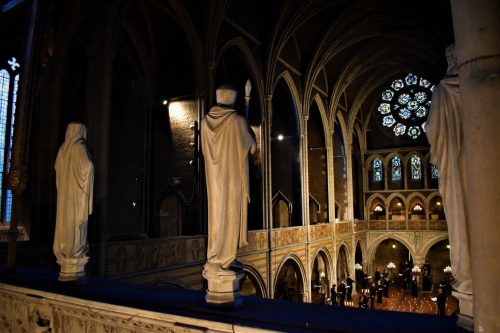 We are delighted to introduce Tenebrae Unlocked, a new series of short concerts filmed in October in the church of St Augustine’s Kilburn – sometimes referred to as the ‘Cathedral of North London’. After a very difficult year, it was an immense joy to be able to spend three days working with our wonderful singers and a world-class production team on this stunning series of films.

While travelling in Russia in the early nineties, Nigel became captivated by the intense spirituality of the Russian Orthodox Liturgy – in particular, the powerful and mystical effect it has when combined with the gloriously sonorous music sung so beautifully by the Russian choirs. Combing old music shops, he began to build up a collection of scores not only from the renowned and celebrated composers, but also some more obscure names largely unheard-of outside Russia. Russian choral music has featured in Tenebrae’s programming ever since, and we wanted to feature some of this exquisite music as part of Tenebrae Unlocked.

Tickets will be available through our online shop from 7pm GMT on 18th December. Each ticket allows unlimited access to stream this film for 30 days through your account, and supports Tenebrae as we face ongoing performance cancellations, and a significant loss of income as a result of the pandemic. Tenebrae Unlocked series tickets are also available. For series ticket-holders, the film will appear in the ‘Your Films’ page once you have signed into your account.