In a five star review for The Times, critic Richard Morrison said of our most recent release “Carlo Gesualdo’s tormented life came to an end 400 years ago, and the anniversary will not be better marked than by this beautifully sung CD.”

Released on Deutsche Grammophon’s Achiv label, the disc of Gesualdo Tenebrae Responsories and Victoria Lamentations for Holy Saturday has been universally celebrated by critics.

BBC Music Magazine – Anthony Pryer
“Nigel Short’s superb musical sensitivity to phrasing and texture illuminates everything. In Lectio, the endless dovetailing of the musical lines, all within an overall architectural vision is exquisitely sustained.”

The Observer – Nicholas Kenyon
“Tenebrae’s faultless control and balance bring the sacred texts to life, including some wild modulations and sudden side-slips. They’re followed by Victoria’s own settings for the day before Easter, which in their powerful serenity and depth I find rather more compelling. The 16 singers of Tenebrae under Nigel Short’s direction shine in the darkness.”

The Financial Times – Andrew Clark
“In these exquisite performances Tenebrae reaffirms its reputation as one of the leading exponents of Renaissance music.”

The Independent – Andy Gill
“…all performed with typical grace and poise by Nigel Short’s Tenebrae.” 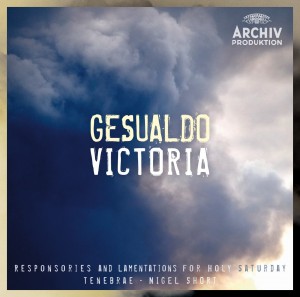