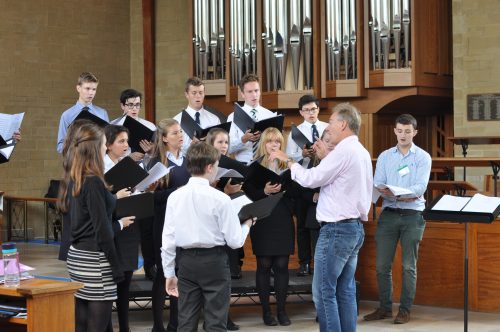 In September 2016 Tenebrae spent three days in St John’s School, Leatherhead as part of an artistic residency. During the course of the residency Nigel and Tenebrae’s Associate Artists worked with the full school choir and the school’s chamber consort, as well as offering Q&A sessions and inviting pupils to observe Tenebrae rehearsals. The residency culminated in a performance of Tenebrae’s new part songs programme ‘Music of the Spheres’, in which a group of the student singers joined with Tenebrae to perform a selection of the pieces.

Nigel thoroughly enjoyed the experience, saying, “They [St John’s School, Leatherhead] have some inspirational and truly enlightened music staff working with the students there and I was delighted with all the groups I heard. When we sang together it was a thrill to realise I didn’t need to compromise my interpretation of any of the music one iota for the school choir, they were on it from the start.” 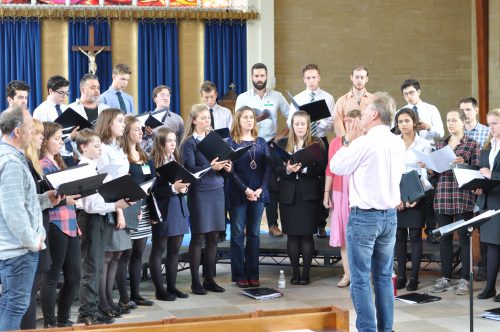 Tenebrae were thrilled to hear that the residency was a hit with the students, as Simon Bland, Assistant Music Director, wrote to the choir “The recent Tenebrae residency was an extraordinary time for everyone at St John’s. It is difficult to quantify the impact that the three days had on general enthusiasm for singing and the star quality that has pervaded performances since. Nigel Short and the team were fantastic: they gave so happily of their time, and many pupils valued their willingness to answer questions about careers in music together with their general tips on good musicianship. The concert on Thursday, rounding off the residency, was electrifying. Many pupils have commented since that these were among the best days of their lives thus far. In the school’s long experience of masterclasses with various groups and ensembles, there has been nothing comparable to the Tenebrae experience. It has to be enjoyed to be believed!”

Tenebrae looks forward to returning to St John’s School, Leatherhead for further workshops and concerts in the future.