Northern Rites is a programme that combines music by James MacMillan with pieces and arrangements from various Scandinavian traditions. I was struck by the stylistic resonances between much of this music and the ways in which spirituality and landscape merge through the sharing of stories that capture and mediate collective memories, both religious and historical. The Norwegian arrangements are particularly beautiful and will certainly contrast from much of the rest of the week’s choral music.

The main aspect of James MacMillan’s music that I find particularly powerful is its honesty. There is something unique about the clarity of his musical gestures that gives the music a raw integrity. I think this is one of the reasons that it appeals to so many people, whether they are religious or not.

Like lots of people who go on to be musicians in some form or another, I began singing at an early age. I was a boy chorister and then sang in choirs throughout school and university. I’ve always found singing in a group incredibly uplifting and exciting – being part of a living instrument that represents a human collective fundamentally in agreement. At a time when people are at risk of becoming socially isolated and disconnected (despite the apparent connectivity of the internet), I think it is this symbolism – choir as pure human cooperation – that is fueling the explosion of choral performance all over the world.

It’s difficult to pick one but MacMillan’s The Gallant Weaver would be a good starting point. Robert Burns’ poem has a timeless love story at its heart and the music is stunning with soaring soprano melodies echoing a Celtic folk idiom which anybody would find beautiful and evocative.

When I was nine I reached the final of BBC Radio 2’s Chorister of the Year and I’m not sure I’ve topped that since. Unfortunately my voice began to change a few weeks before the final and I had to drop out. A bit more recently SANSARA won the 2015 London International A Cappella Choir Competition, also at St John’s Smith Square, which gave the group a real boost and I’m still very proud of that.

Quickfire round:
Bach or Handel? Bach

SANSARA are performing as part of the Holy Week Festival on Thursday 18 April, 6pm at St John’s Smith Square. 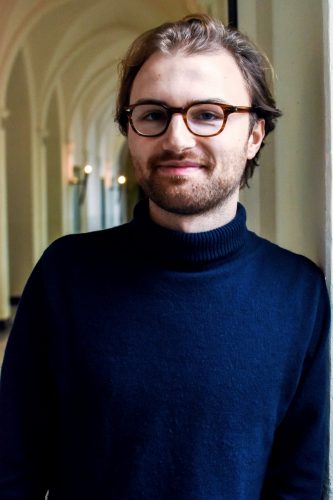