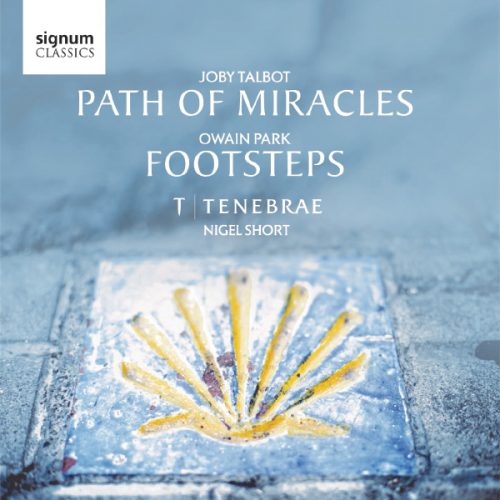 As we make a start on our busiest year yet I could not have been more excited than to get things under way than with Joby Talbot’s extraordinary work Path of Miracles. As it’s been almost ten years since we last performed it, it’s been wonderful to see the excitement of singers coming to the piece for the first time. We had two days of rehearsals to get it all up to scratch and remind ourselves of all the little extra things we did ten years ago to help make the piece really live and come off the page. Written in seventeen different parts, the individual lines don’t look too complicated until you start putting them together! It’s tricky pretty much all the way through and there are traps everywhere. There are few, if any other a cappella choral works on this scale that require such unbroken concentration which all makes for a pretty intense concert experience, something the rehearsals don’t really prepare you for. During our rehearsals we were joined by the choir from Brigham Young University and their directors Andy Crane and Rosalind Hall. It was a real treat for us to join with them and sing through our newly commissioned companion piece for Path of Miracles, Footsteps by Owain Park. This is a wonderful new work with gorgeous vocal textures and exciting rhythmic passages – including one or two cleverly hidden references to Joby’s Path of Miracles – written for Tenebrae and companion choir choir. The BYU guys sang their part note perfect and it was beautiful to hear the piece come together the way Owain had planned. It’s a wonderful chance for other choirs to sing alongside Tenebrae and for young singers to hear and experience what it’s like standing in amongst the ranks of our gifted professional team of singers.

The first performance of our relaunch was in Hull and for Footsteps we were joined by singers from Hull Choral Union, Hull Minster Choir and the City of Hull Youth Choir who did a fabulous job. Somehow they managed to keep their eyes on me despite the amazing sights around us of the Minster nave being covered in scaffolding. It was fun to do an initial recce of the Nave with Henry and Helen wearing hard hats! A huge thanks to Jane Owen, Mark Keith, Clare Todd, Suzanne Brown and all the singers who took part to make this event so special. For our performance at the glorious Abbey in Bath we were joined by singers from the Wells Cathedral School Chamber Choir. They were terrific and I’m especially grateful to them and their director Christopher Finch because many of them were in the midst of important GCSE examinations…fingers crossed for good results in August! 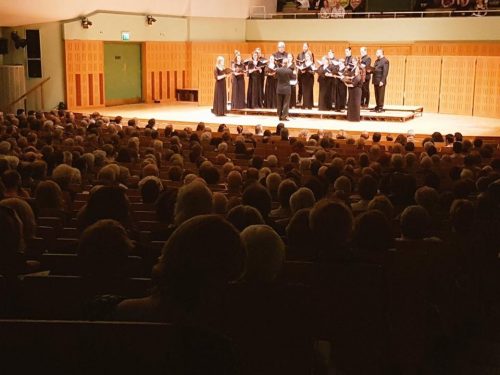 In between these two concerts in Hull and Bath we raced over to Dublin to sing our Russian Treasures programme in the National Concert Hall. Singing to a capacity audience we were treated to a wonderful reception and standing ovation. We felt we’d earned the right to enjoy a glass or two of the dark stuff…. 🙂  A couple of days later and we were up in Perth for another outing of our Russian gems. As always it’s a joy to hear the Tenebrae singers bring their individual vocal richness to this beautiful music. Of course the low basses get everyone’s attention pretty much constantly given they spend most of the evening around low B flats and even lower for two other works in the concert. Adrian Peacock and James Holliday deserve special mention for their low notes, although they have been known to meander towards and even above middle C every now and again! The girls were not to be outdone, however, and sang their pieces with all their customary poise and made the church shimmer with radiant sounds. This was a special concert too as we welcomed a couple of new singers to the choir. Congratulations to them for holding their nerve and delivering such a polished performance in what is, if you’re not used to it, a hugely varied and demanding programme in terms of vocal range and dynamic control, together with all the challenges of singing in church Slavonic of course!

I’m about to head off with the family for a week’s break in the stunning surroundings of St David’s in Pembrokeshire. No rest for the wicked however, as Tenebrae will join me for a concert in the Cathedral there on June 2nd. We’ll perform Path of Miracles again together with some gems from the Spanish Renaissance composers Victoria, Lobo and Guerrero. I can’t wait. Shortly after this we’ll turn our attention to a concert in Oxford, where we perform in the church of St John the Evangelist, singing the dramatic Tenebrae Responsories by Toma Luis de Victoria followed by his intensely beautiful setting of the Requiem.

Then we’ve got July to start thinking about……