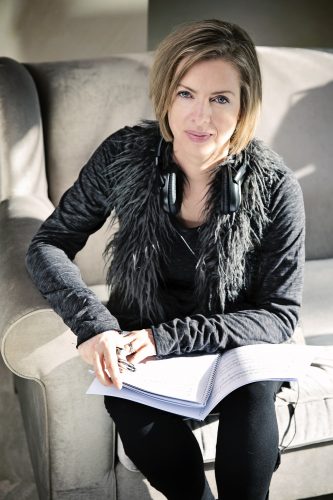 We’re thrilled that the wonderful composer Joanna Marsh is writing a new commission for us, to be premiered at Wigmore Hall on 1 December 2019. The new piece, In Winter’s House, is for male voices only and is written to sit alongside Britten’s Ceremony of Carols in its SSA arrangement. We caught up with her to find out more about the new piece:

Have you taken any inspiration from Britten’s work in composing this new piece?

My piece isn’t influenced by the Britten in any intentional way. But I would say that because of the strophic nature of Jane Draycott’s text which takes the shape of a carol, there is an element of similarity of perspective that has naturally followed. Britten gives each of his carols a strong identity through bite-sized motivic ideas expressed right at the outset. He works these motives extremely hard through each carol which gives each a very strong character. Similarly in my piece, I have taken quite a condensed musical idea which appears straight away in the piece and gradually becomes fundamental in the structure over time.

Can you tell us a bit about the text you have chosen?

The poem ‘In Winter’s House’ sprang out at me when I read it. Jane paints with the language of fairy tales the imagery of darkness and light, sin and redemption. Her expression is very allusive and there is room for one’s imagination to take flight with the words. In fact when she talked to me about the poem I was surprised that at the time she wrote it she was feeling quite dark about society generally and the pickle the world was in. I really hadn’t picked that up from reading it. I had rather assumed that the shadows were there as a foil for contrast, to make the light brighter when it arrived. But on reflection the opening verse is slightly gloomy although this is soon dispelled with mention of feathers, gleaming, pearls and torches etc. The child and the dream of light definitely imply hope and the text overall has a dappled feel throughout; intermingling light and dark. At a technical level one of the things I really like about the poem is the structure of the verses and the way she has stretched the last verse to give a finality that is definitely reminiscent of a carol as you would see it written in a hymnal. It lends itself well to musical treatment.

What are the challenges of writing for voices?

It is really important to keep in mind the comfortable range of each voice. If you give singers long sections high up in their range you tire them. Similarly, sinking them into an uncomfortably low area makes it very hard work for them after a while and risks strain. And then they just won’t want to sing your work! So the challenge is to keep this in focus at moments when you really, really need some fantastic high notes – or something earth-rumblingly low. That said, some composers have made whole careers out of taking the voice into the craziness zones, and are doing well on it. Although possibly the singers are slightly less keen!

Another thing I find important to bear in mind – as a composer whose harmony tends to be a bit ‘overcast’ with added notes – pivoting tonally around with harmony shifting like sand under people’s feet is to be feared. Not every singer has got an electromagnet under their shoe that can root them tonally and prevent them migrating. You have to try to announce a radical change of harmonic direction by giving someone, just one voice, something to hang onto like rail in a storm at sea. And then you just hope that the others are holding onto their hand, or clothing at the time and no-one (or the whole lot) gets washed overboard.

You’re currently living in Dubai, where you co-founded ChoirFest Middle East. What have been your highlights so far?

ChoirFest will reach its seventh edition next March and has now become a part of the musical fabric of the UAE, especially in the minds of schools who start preparing for it right at the beginning of the year! It is great that Dubai now has an opera house which we use and overrun with thousands of singers each year. It is the perfect venue for us and they are always delighted to work with such a large community project that brings in terrifically wide demographic.

Regarding other highlights, I have been in Dubai twelve years so really there have been many extraordinary developments over that time. However a recent pet project is the Dubai Opera Festival Chorus, which I put together for the BBC Proms Dubai this year. Because Dubai is such a melting pot of cultures, the chorus brings together singers from many different traditions and was a particular pleasure to see Western and Arab singers performing Beethoven 9 together with the BBCSO last March. On the 6th December the Chorus will perform the Messiah in Dubai Opera – a big deal because it is an Islamic country.

Which future projects are you particularly looking forward to?

My Beautiful Camel – my first opera gets an airing in New York later next year and some of it will be recorded, very exciting! Watch this space.

Catch all that Joanna is up to on her website joannamarsh.co.uk. Her commission for Tenebrae is being premiered at Wigmore Hall on 1 December 2019, more information and tickets available here.