Since starting as an Associate Artist with Tenebrae in September, I have been lucky enough to perform with them in Germany, Austria, France, the Netherlands and America, as well as in fantastic venues here in the UK. Our tour to Berlin and Linz was memorable for a few reasons – most notably Nigel’s absence during his recovery. James Sherlock stepped into the role and guided us brilliantly through our contribution to the Prayse! Festival in Berlin. We sang 3 services in a day at the Kirche am Hohenzollernplatz; Lauds (6:30am), Sext (12pm), and Compline (11pm), joining with Berlin’s Sirventes singers for a very special performance of Tallis’ Spem in alium. This was followed by a Sunday full of delays on our travels to Linz in Austria. Our journey was worth it though, for a challenging programme in the Alter Dom in Linz. The Messe für gemischten Chor by Hindemith a great test, as well as several Bruckner motets (he served as organist in the Alter Dom between 1856 and 1868). Upon our return, we performed as part of a contemporary art installation outside the Tate Modern, within an ‘illuminated choral sculpture’ created by Es Devlin. The performance was designed to draw awareness to our biosphere and how we can best learn about and then protect its inhabitants. 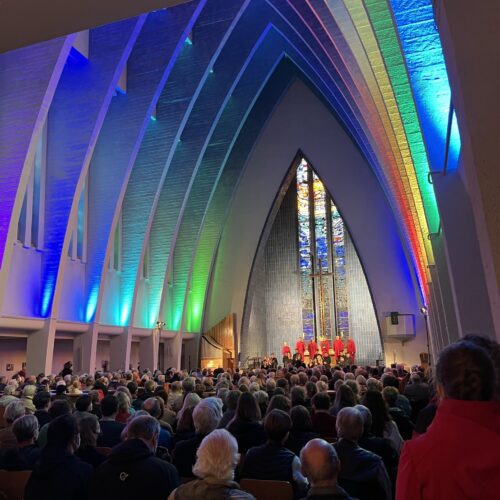 Tenebrae perform with choirs from across Europe at Prayse! Berlin 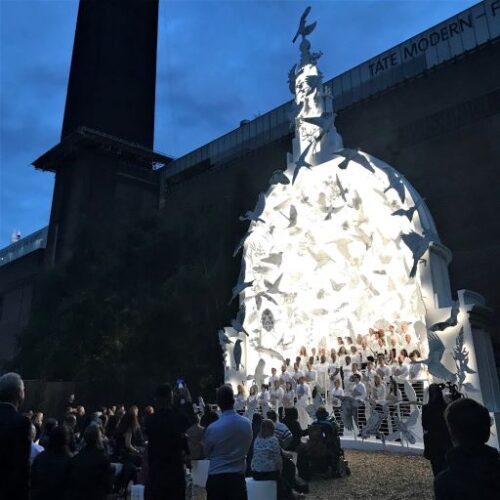 A spectacular outdoor installation at the Tate Modern.

A highlight so far for me has to be the walk up to the beautiful island of Mont Saint-Michel, off the Normandy coast in France, a stunning town that reminded me of ‘Minas Tirith’ from ‘The Lord of the Rings’ from afar. Performing two programmes consecutively in the Abbey, including Joby Talbot’s Path of Miracles, was an absolute privilege, even if my calves don’t agree with me after all the stairs we climbed. The choir then performed excerpts of the piece live on BBC Radio 3, ahead of a performance at St. Martin-in-the-Fields (where I have sung many times in the choir there, and to which my parents came to see their first Tenebrae concert!). 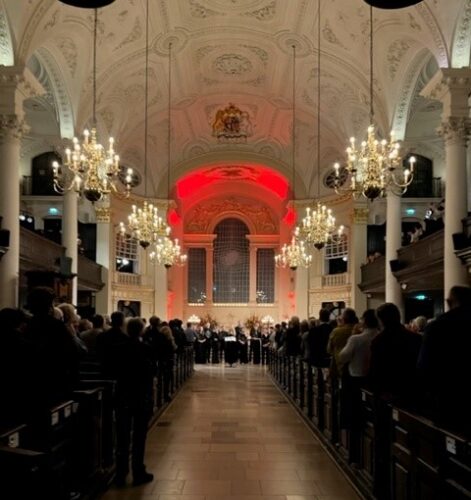 A standing ovation for ‘Path of Miracles’ at St. Martin in the Fields, London.

Our tour to the USA in November began in a balmy Florida, continuing up the East Coast to New Jersey (with our workshop with the Princeton Glee Club a highlight!), to JMU in Virginia, and finally to Texas. The schedule was very busy, with many fantastic moments, both musical and otherwise (see our blog posts from the tour for the epic Jenga match), and we were led brilliantly in concerts by Gabriel Crouch and Jamie Burton, who were fantastic. 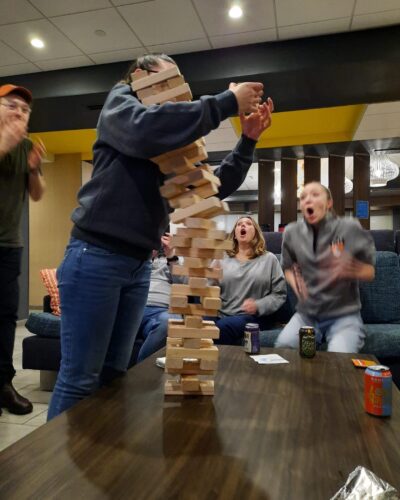 Jenga in the USA!

December was a busy period for Tenebrae, with two tours in Europe as well as concerts here in the UK, providing a great patch to sing some of the most satisfying choral repertoire within the festive season. Much of our programme was based around the recent CD release ‘In Winter’s House’, with the glorious title track by Joanna Marsh being a definite highlight for me. On our Dutch tour we sang on both Dutch radio and the EMTV streaming channel, which was a great way to showcase how the programme had come together across the month, in particular with regard to the Twelve Days of Christmas, and its plethora of weird and wonderful animal noises…

In addition to our busy touring schedule, I have loved becoming involved in workshop leading as part of our Choral Development Programme with London Youth Choirs. Having never led or been part of workshops before, this has given me invaluable experience that I am excited to continue developing through this year and beyond. Also the Singing Schools programme, led by the fantastic Hannah King, has been great for us all to become involved in. Working regularly with the children and teachers allows us to see their development over time, and we also see how this impacts the schools as a whole in developing a longer term culture of music-making. After a busy first term, I’m very excited for all of the projects in the pipeline. This opportunity is very much a dream for me – to work with Tenebrae and to tour such incredible and challenging music across the world.

Upcoming projects to look forward to include a brief tour to Reggio Emilia in Italy this weekend for our Spanish Glories programme, followed by Rachmaninov Vespers at St. Martin-in-the-Fields, a tour to the Kirche Fraumünster in Zurich, Orthodox Treasures in Nantes and a tour across the pond in March!