On Tuesday July 29th, Tenebrae will return to the Three Choirs Festival to perform their celebrated programme of ‘Russian Treasures’ at Worcester Cathedral. Established in 1715 and nearly in its 300th year, Three Choirs is one of the world’s oldest classical music festivals. It is fitting then that Tenebrae’s performance, sung by candlelight, will span a breadth of works by some of the greatest names in Russian Orthodox music such as Rachmaninov and Tchaikovsky, whilst also delighting audiences with choral gems by less well-known composers like Chesnokov and Golovanov.

This will be Tenebrae’s second performance of the ‘Russian Treasures’ programme following its launch in St James Church, Spanish Place, earlier this year, where the choir left audiences ‘captivated and refreshed’ (The Church Times). 2014 also saw the release of Tenebrae’s highly successful recording of this music for the choir’s twentieth album since its foundation in 2001, with ‘Russian Treasures’ soaring to number one in the Core Classical Music Charts and receiving five stars from the BBC Music Magazine. You can hear samples of this recording on the Tenebrae Soundcloud page, and purchase this album from all good retailers, including Amazon, iTunes and Signum Records.

For tickets to hear Tenebrae perform ‘Russian Treasures’ at Worcester Cathedral on July 29th, and for more information, please visit the Three Choirs website. We look forward to seeing you there! 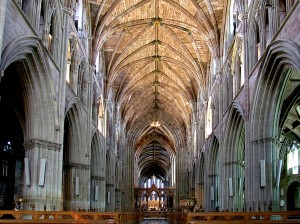