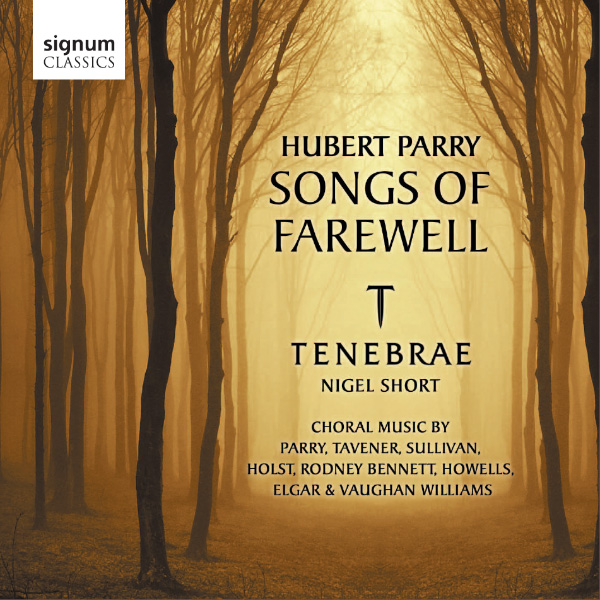 Following a string of five-star reviews for their previous discs of 20th-century French choral music and Renaissance polyphony, the professional chamber choir Tenebrae go from strength to strength with this new recording of British part songs and choral music centered on Hubert Parry’s Songs of Farewell.

Composed towards the end of Parry’s life, the Songs of Farewell have taken on something of an epithetical interpretation; they are almost a musical summation of his compositional life, reflecting Parry’s love of English renaissance madrigals and partsongs as much as the influence on his work from German composers like Brahms – made more complicated as these works were composed as the country (and its music) fell out of favour at the start of the Great War.

Tenebrae’s account of Parry’s Songs of Farewell abounds in subtleties of phrasing and telling distinctions of dynamic, yet flows beautifully, the textual narrative unfolding with a rare continuity and coherence. Technically the singing is impeccable without being at all effortful or studied…Huge credit to Nigel Short. Of this programme’s type, I can’t envisage hearing anything better.

We’ve asked our singers to name their favourite Tenebrae tracks and the music that’s keeping them going at the moment. Have a listen to the Spotify playlist for the full selection.

A favourite track of mine is Footsteps... continued

Meet me in St Louis

We’ve made it to day 8 and concert 6 of our USA tour and we have officially passed the halfway point. St. Louis was the first place on this tour that I was returning to after coming in March 2018 and I had mixed memories of the place.... continued

We’re very excited to announce that Tenebrae will be returning to the United States for an extensive tour in November 2019. We will be visiting the University of Georgia in Athens, GA; Charleston; Duke University in Durham, NC; University of Mary... continued