We’ve asked our singers to name their favourite Tenebrae tracks and the music that’s keeping them going at the moment. Have a listen to the Spotify playlist for the full selection.

A favourite track of mine is Footsteps, by Owain Park. I’m a bit biased as he’s my other half, but that’s actually not why I’m choosing it! In 2016 I was in my first year of freelancing, and was a member of the NYCGB fellowship octet. One of the great opportunities we had was to come and record the community choir parts for Footsteps. It was a real eye-opener for me to watch Nigel and Tenebrae at work, and it’s lovely to be on the other side of that now – every time we perform it I am reminded of that day.

Something I’m listening to at the moment is an album called Of the People by a quintet called Kabantu. They’re a fusion group working across the classical, jazz and folk traditions and won the ROSL competition a few years ago. If you pinned me down to a track, I would probably have to go for the opening one – Ulidzile – but number 3 (Gago Grego) is really cool too. 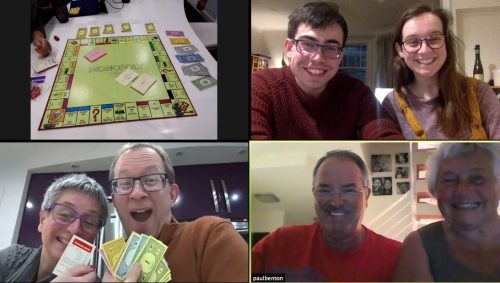 Owain and Hannah have been playing virtual monopoly with the family too!