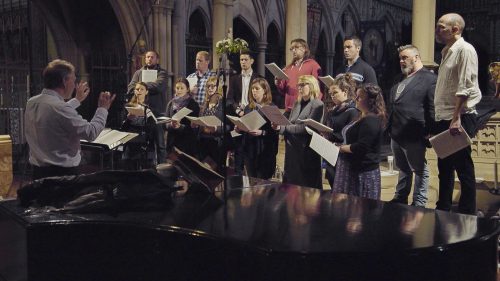 Tenebrae recording a disc of works by Pawel Lukaszewski – May 2016

It’s been a busy but incredibly rewarding month for us, with the usual amount of varying repertoire and concert venues.

First of all we spent an intense few days recording some wonderful music by Polish composer Pawel Lukaszewski in St Augustine’s, Kilburn. It was a real pleasure to have Pawel with us to help give clear and incise instructions as to how he wanted things to sound. The music was full of a vast array of choral textures that I loved listening to, so whilst it may have been quite vocally demanding from a stamina point of view for the singers, I think it will be a beautiful disc.

Our ongoing success with Russian Treasures then took us to the peaceful and spiritual setting of Douai Abbey for a wonderful performance as part of the Newbury Spring Festival. In the stunning acoustic everything sounded even more luscious than usual. The following night Dorchester beckoned, where yet again our low bass team of Adrian Peacock and Jimmy Holliday gave us the firmest possible foundations for all the heavenly and romantic harmonic offerings of Rachmaninov and his compatriots. My personal highlight, though, may well have been Chesnokov’s Svyete tihiy for the sopranos and altos. The ladies’ ensemble, blend, balance and intonation in both performances was utterly stunning, but it’s the sheer beauty of the sound they make collectively that makes the audience gasp and sigh audibly when they finish the final chord.

Chalk and cheese: and so to the Savage Club for a gorgeous programme of music by Delius and arrangements by Percy Grainger. The programme was devised by Julian Baker, younger brother of one of our own patrons, Richard. Splendid solo contributions from tenor Tom Robson and baritone Stephen Kennedy made for an evening full of wonderful and nostalgic music. There was a lot of fun, too, with a special arrangement for 10 (yes, 10!) horns, a piano and a tuba performing ‘The way you look tonight’! 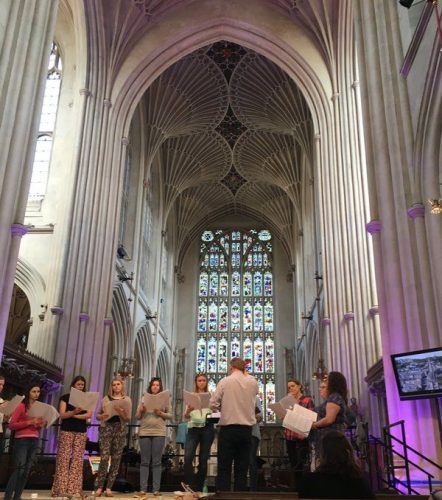 Next, the choir travelled to Bath Abbey as part of the Bath International Music Festival for a performance of music by Brahms, Bruckner, Rheinberger and Reger and for which we were joined by sensational player and accompanist Alexander Mason.  This programme is built around music from our award-winning CD so we almost know it from memory and every piece is an utter joy to hear this choir sing. The Abbey, with its amazing fan-vaulted ceiling and wonderfully generous acoustic was perfect for all of this repertoire and for much of it I was in heaven. Once again, and I risk offending some of the chaps in the back row by saying this, the highlight was possibly from their colleagues in the front row performing Brahms’ Ave Maria. It’s always a very good sign if the gents are beaming with pride as the ladies sing their upper-voice pieces and on this occasion it was clear the sopranos and altos were singing at a world-class level. Bravissima and thanks to all the ladies.

And so we now look forward to two special concerts in Paris. Every choral enthusiast will know and love Duruflé’s Requiem and we will have the rare chance to sing some of Duruflé’s other music in his own church, this time one for the gents – ‘Messe Cum Jubilo’. I can’t wait! In a televised concert from the Sainte Chappelle we will be performing a programme of Tavener, Allegri, Harris and some Russian music. I gather this will be the first time the Allegri has ever been sung in the Sainte Chapelle so I am very much looking forward to this trip. I might have to squeeze in a nice dinner too and who knows, maybe even a nice bottle or two of their very fine grape juice…!