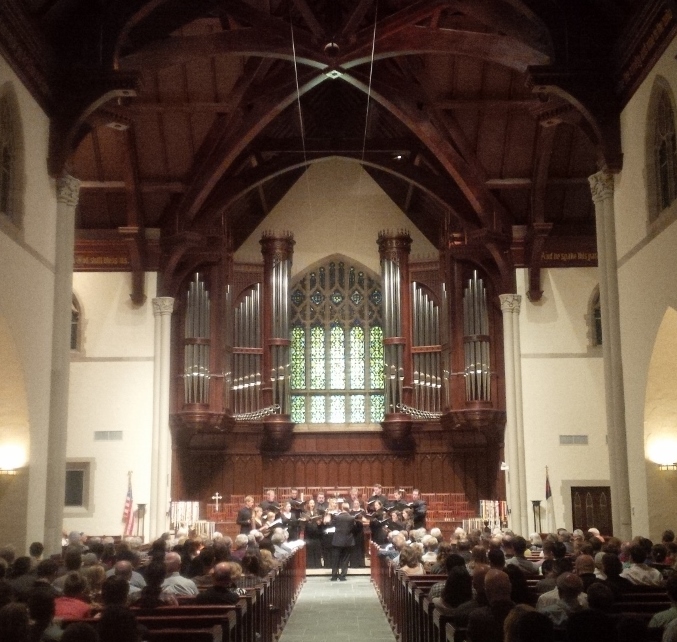 They say that ‘everything is bigger in Texas’, and one supposes there must be some truth to the aphorism. But I’m not sure any of us were quite prepared for the form this would take for our first stop in Dallas.

After a long travel day, we were up at 9am for a rehearsal on the first morning. Other than six members of the choir who then had a workshop, we had an afternoon off to try and acclimatize. The lunch that four of us had that day was the first ‘big’ event, and in true (Italian) American fashion, it was pizza. Both the portion sizes and flavour were extraordinary! After lunch we returned to the hotel for a rest. We had been warned that there was a considerable amount of rain on the way, and a quick look at the weather channel confirmed that we were, in fact, on the periphery of the incoming Hurricane Patricia.

And so we approached the first concert tired and slightly apprehensive, but ultimately well fed and raring to go. The folks at Highland Park Methodist Church were kind and generous hosts, offering true American hospitality. The huge buildings surrounding the church itself were warm and softly lit, and offered a homely area for our pre-concert preparation. The first half went without a hitch; a beautiful blend of rich European and Mexican polyphony. The second half, however, was not so uneventful. One expects there to be occasional, small issues in performance, whether it be a loud air-conditioning system or shadows across one’s music. But part way through this half, the whole church was suddenly and unexpectedly plunged into a deep and engulfing darkness. With this turn of events and the torrential weather, one couldn’t help but feel something ghoulish was about to occur! Lucky as I am to get to sing with a group of such consummate professionals, those who knew the music well continued to the end of the phrase and stopped, able to see neither music nor conductor. Nigel turned round to exclaim ‘I’m so sorry, ladies and gentlemen, there appears to be some sort of problem!’, to roars of laughter and applause. As the choir often performs in less well-lit areas, we all had a set of book lights in our backstage room, so after a short announcement, we left the stage to retrieve them. Of course, the main lights went back on as we were about to go back on stage. But we decided to perform with the book lights on just in case… And it’s lucky we did, as there were two more blackouts during the concert! After the second one, Nigel requested that the lights be left off should it happen again, which of course it did. And so Tenebrae lived up to their name, performing in the shadows created by the tiny lights on our folders. One of the more amazing effects of this was that Nigel’s hands were projected onto the church walls in massive silhouettes. This most certainly added to the effect of feeling like we were performing in a horror film!

Coming to the end of our short time in the Lone Star state, one can’t help but reflect that, with the food, the weather, the buildings, the darkness, and Nigel’s silhouetted hands, everything really is bigger in Texas.