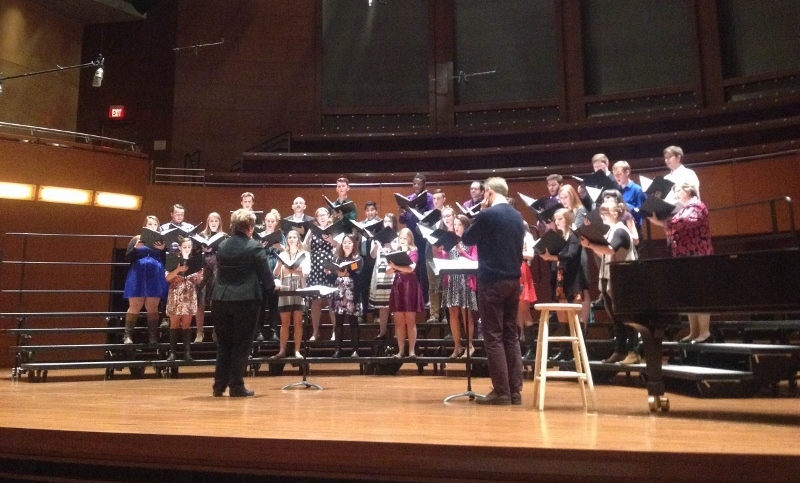 Another early start for concert no 3 at JMU in Harrisonburg Va., but this time for a long coach ride, preferable to running the gamut of morning TSA queue misery at airports. The route took us through rural parts of Maryland and on down picturesque Route 81 and the Shenandoah Valley – at the right time of year to see a stunning range of glorious fall colours (should that be colors?).

Those of us who had been to JMU on previous tours knew to expect Southern Hospitality, an outstandingly warm welcome and great organisation – and we weren’t disappointed. Harrisonburg is a quintessential College town and James Madison University a very popular State University with around 20,000 students and high ratings. Our arrival coincided with the build up to a Local Derby (American) football game against the University of Richmond that ESPN had unusually opted to broadcast nationally. Parties were in full swing inside and out, and members of the marching band turned up in their bright purple band costumes and plumed hats for their choir workshop with Nigel. The JMU Forbes Center is a wonderfully well equipped and maintained music facility with an auditorium that has true but not over-flattering acoustics.

Increasing familiarity with the programme is now paying dividends and the welcome addition of Gabriel Crouch has clearly improved the tuning of the basses… the concert was again very warmly received and described later by NS as “tight”. Morale and health are happily holding up and the good humour (humor?) was aided by Tom Robson’s discovery on turning on his Iphone that someone had changed his Siri name greeting to the c-word. Maintaining the tradition we started in Dallas, when we left JMU, the Center was completely blacked out by a power cut, this time with no storms in the vicinity. Clearly this group has special powers.